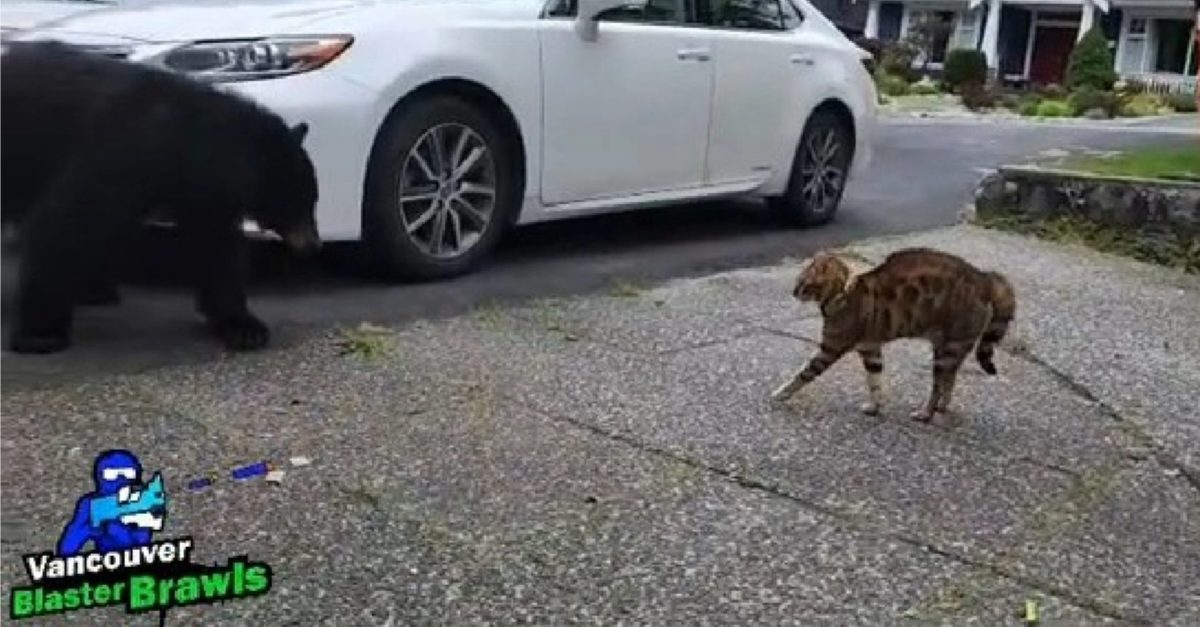 Bengal cats and Bengal tigers are two very different felines. But don’t tell Bengal kitty Tigger that. Though he’s of the domestic variety, inside his chest beats the fierce heart of a tiger!

Though he’s a house kitty and not a jungle predator, Tigger prowls his territory like the biggest and boldest beast on the block. Whoever so dares tread upon his turf puts themselves at the risk of tangling with Tigger. And a black bear found out the hard way just how terrifying a brush with the Bengal bruiser can be.

Brothers Gavin and Cameron Sturrock are used to two-year-old Tigger’s ferocity. It’s not unusual for him to puff up and tell a dog to get lost. He also enjoys brawling with his Bengal brother Taz. And he’s been known to filch chicken from the air fryer when he feels like a snack. Yet, for all his wild cat ways, Cameron and Gavin never figured Tigger would bow up at a bear! But he sure did, and Gavin captured the hair-raising moment on camera.

While carrying equipment outside for an upcoming camping trip, Gavin stopped short at seeing a black bear in his driveway. And more shocking, there stood Tigger, just feet away from the bear and ready to defend his territory.

“He was two feet away from this bear,” Gavin explained to Global News. “I was freaked out, ‘Oh my God, this bear is going to eat my cat right now.’”

But Tigger had different plans.

Face to face with the bear, Tigger arched his back and growled out his warnings. And then, the bold cat advanced on the intruder, forcing the bear to retreat. In the audio, Gavin can be heard calling for Tigger, but the courageous kitty is too focused on his bear business. And as the bear lopes away, Tigger gives chase, ensuring his territory is secure.

Cameron and Gavin shared the clip of Tigger versus the bear on TikTok, where it quickly grabbed more than 150k views. And just like so many who watched the clip, Cameron couldn’t believe his cat’s ferocity, sharing, “I saw the cat just chase after the bear, and I was like no way.”

Since dealing with Tigger, the bear hasn’t dared to return.

Tigger isn’t the only Sturrock trouble maker, though. Brother Taz made the news when he was just seven months old after he slipped out of the house and had to be rescued from a tree by firefighters from North Vancouver District.

With a pair of Bengal brothers as wily as Tigger and Taz, we wish the Sturrocks good luck because these two little big cats probably have many more adventures to come!

Watch This Smart Bengal Cat Test The Physics of Water—WOW!

Watch This Smart Bengal Cat Test The Physics of Water—WOW!