[ads1] [dropcap]I[/dropcap]t wasn’t long ago researchers believed cat domestication occurred in South West Asia. The birth of agriculture some 10,000 years ago led to an overpopulation of rodents. This rodent problem was an invitation to the wild cats of the area to come closer to humans.

Felis silvestris lybica was the wild cat native to the area and is the cat that all current domestic cats (Felis catus) are descended from. While these cats weren’t domesticated overnight their initial usefulness led to them developing a bond with the humans of the region. It was thought these first domesticated cats then spread throughout the rest of the world with travelers.

However, recent studies have shown cats were also domesticated in China over 5,000 years ago. The Asian Leopard cat, ancestor of the beloved Bengal was a companion to early Chinese farmers. Seeking to eradicate the mouse problem caused by the growth of the agricultural industry these farmers invited the cats into their barns with open arms. The more food the farmers were able to store the more mice were reproducing and consuming the stores, and the more cats were needed to keep the population in check.

Though the friendship was one of mutual benefit it’s unlikely that either the farmers or the cats harbored any affection toward one another. For the modern human/feline partnership to flourish there needs to be a mutual adoration on the parts of both parties. This wasn’t the case in early China as both humans and felines were fighting for survival in a harsh habitat. Some scientists argue this means instead of typical domestication the cats of China simply had a commensal relationship with the humans of their environment.

Regardless of how the relationship was formed its existence was proven and evidence was published in the January 22nd edition of the Science Journal PLOS one. The publication details the original hypothesis that Felis silvestris lybica evolved independently in both South West Asia and China.

Scientists examined small felid bones from the area using geometric morphometric analysis. Which is basically the science of comparing certain landmark features like tooth size and skull size of similarly aged fossils to see their similarities and differences. They then use their findings to determine how things have changed over time and label species accordingly.

When conducting this particular experiment on the felid bones from China they were able to determine that instead of F. Silvestris as they hypothesized the bones actually belonged to Prionailurus bengalensis or the Asian Leopard Cat. It’s not known exactly how long the relationship between the two lasted, but one can deduce that it did not last since all current cats in China are now descendants of F. Silvestris.

Many Bengal fanciers will refer to their cats based on what generation they are from. While F1 cats tend to be rather shy and in tune with their wild roots other generations are much more friendly. In general Bengals are known as an adorable, energetic and loyal breed, though they can sometimes be a bit rambunctious and destructive due to their recently domesticated ancestors.

If you have ever met a Bengal in person it’s likely that you have noticed their beautiful coats, stunning eyes, and uncanny intelligence. While all cats have eyes full of wisdom the Bengal cat seems to be unusually intelligent. They are capable of learning as many tricks as the average dog, but motivating them to do what you like can be a bit of a challenge.

The best way to train a Bengal is to use dehydrated meats as treats and break down the tricks into simple steps. After the cat learns each step you can begin to slowly string the steps together until the cat can perform the entire trick. Mental stimulation and training are very important to the Bengal due to their recently re-domesticated ancestors. Wild cats spend much of their time hunting and prowling through their territory. With many Bengals living as strictly indoor cats, it is up to their human caretakers to ensure their needs are met. 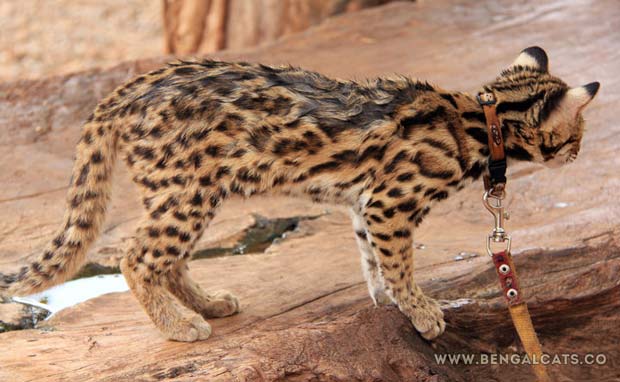 Like their wild ancestors, Bengals are often very territorial and many are turned into shelters because of marking, either via spraying (when a cat urinates to make his territory) or scratching (when a cat creates vertical or horizontal scratches in their environment to signify to other cats that they are in the area).

To keep your Bengal from marking his territory it’s a good idea to have them spayed or neutered as this will cut down on some of their hormones and aid them in having a more balanced personality. It is also important to have lots of vertical and horizontal scratching posts that your cat can stretch his muscles on.

If you are set on breeding your Bengal or surgical sterilization simply isn’t an option ample exercise can help your Bengal be even tempered and relaxed. Toys like Da Bird are great for exercising your feline friend. Da Bird is a wand like toy that is designed to mimic the wings of birds in the wild. This interactive toy is a great way for you and your cat to bond, and for you to keep him in tip top mental and physical condition.

Cat Exercise wheels are also a great new invention that has Bengals everywhere purring. These wheels are based on the typical mouse wheel, but they are much larger to allow the cat to safely run on them. Many Bengal parents have reported their cats are much happier now that they have their wheels, and that the cats use them multiple times a day.

Vertical hides, cat trees and shelves are another must have for Bengal cat owners. These can help your cat feel like he is at home in the jungle and keep him on his best behavior when it comes to your furniture.

If you have multiple cats make sure that they each have enough space and plenty of toys and hides for each of them. With the average domestic cat this is important, but with Bengals it is vital to their overall health and well being. Each cat will also need his own litterbox as many cats do not like to share.

While there is a world of difference between the ancient cats of South West Asia, China, and the cats of today one thing is certain. No matter how much cat’s evolve and change they will always retain a bit of their wild instincts. We only have to look at breeds like the Bengal to get a glimpse into the past. It’s easy to imagine Chinese farmers with Bengal like cats following them through the fields pouncing on mice as they run for cover.

No matter what part of the world cats evolved from, or what breed of cat you prefer no one can deny the Bengal cat is a stunning feline specimen, as is his ancestor the twice domesticated Asian Leopard Cat.

Source: Cats domesticated in China earlier than 3000 BC Emily Bruer
Emily has been penning the adventures of her imagination since she was old enough to hold a pencil. Working at animal shelters for the last five years she learned an incredible amount about animal care and behavior. She is currently employed at a vet clinic where she continues her animal education. Emily’s love of animals is evident when you step into her home, which she shares with six dogs and six cats, all of whom were rescues.

These Bengal Cat Tattoos Are Purrfection!

How To Trim Cat’s Nails