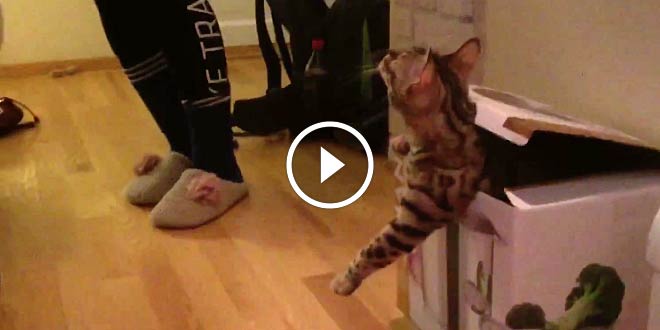 [ads1] [dropcap]I[/dropcap]t is a well-known fact that cats love boxes, and Bengal cats are no exception! No matter the size, if you leave a box unattended in a house of cats you’ll likely come to find someone has curled up inside. However in true Bengal fashion, this frisky feline has a more exciting use for this box than the traditional cat nap.

Snowy the one year old Bengal in this video clip, is extremely playful and adventurous. Maybe a bit too much for his new older Bulldog brother, “Einar The Frenchie”. Snowy is extremely clever, using his box as a hideout while he plans his next surprise attack. Whether that be on his owners who pace back and forth playing along in his games, or his unsuspecting French Bulldog brother.

These kinds of games are the domestic version of stalking & hunting prey, they are also a great way to provide your cat with mental stimulation!

However we think that Einar may prefer a game of chase or a long nap, rather than playing the role of prey in Snowy’s playful hunt! While the title of the video says he thinks he’s a genie in a bottle, we think he’s more like a Jack in the Box, you never know when he is going to pop!