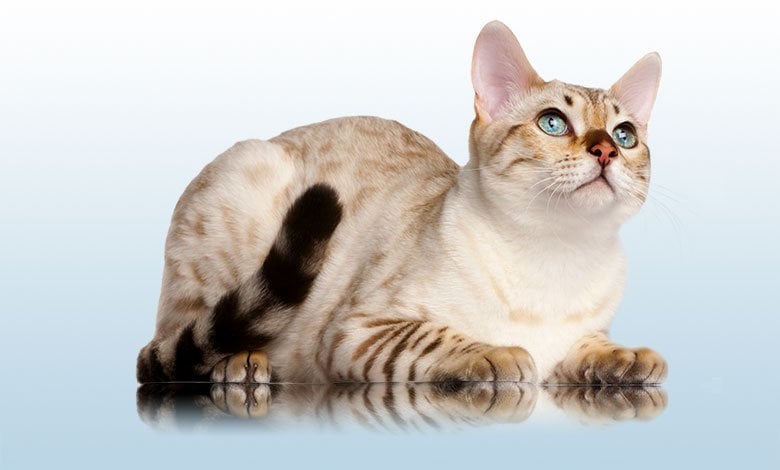 Cats are amazing animals. However, it would be selling them short to group them all into one huge category.

Have you ever heard of the Snow Bengal cat?

Bengal cats are an amazing breed of felines and are absolutely breathtaking. They are well-known to be athletic, beautiful cats.

The unique genetic makeup of the Bengal cat dates back to the 1970s and results in fantastic variations of colors and patterns.

Among the different colors within this breed is the white Bengal cat, described as “Snow”

Similar to the snow leopard, the snow Bengal has a white or light brown pattern. There are three main patterns: Lynx Point, Mink Tabby, and Sepia Tabby. The Snows can be Rosetted/Spotted, Marble, or Charcoal.

If you’re looking to learn more about this cat and what makes it so special, keep reading. 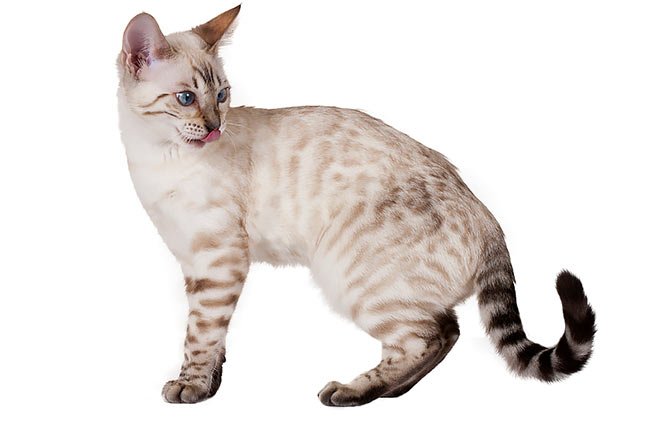 The snow Bengal cat is a man-made cat breed that was created by crossing gene pools in breeding programs.

An interesting aspect of snow Bengal cat genetics is that their genes are recessive. Recessive alleles need TWO copies to be “seen”.

It means that a brown spotted Bengal cat may carry the specific genes responsible for snow Bengal cat characteristics.

You can’t actually “see” it physically but it’s hidden in his genetic coding and may be passed onto offsprings.

This unique genetic characteristic means that it could possibly take generations for a snow litter to form.

The first snow lynx Bengal cats appeared early on in the breed’s development when some of the domestic cats crossed with Bengals, were carriers of recessive colorpoint genes.

This original variation of the cat was known as the “Seal Lynxpoint” snow Bengal and was the result of the albino gene in the Siamese gene pool.

This cat usually has a white fur coat with distinct spots and markings, along with striking blue eyes.

The foundation cats to look for in Bengal pedigrees for the seal mink and seal sepia snow Bengals, come from the late 1980’s, early 1990’s.

They introduced the Burmese domestic cat gene pool into their programs by breeding Warhawk of Flyingwfarms to a sable Burmese.

The second generation from that cross gave them the first seal sepia “snow leopard” with green eyes, Kotton Pickin.

His maternal grandfather, Warhawk of Flyingwfarms, was the first glittered Bengal to be shown in the early days.

And his father, Millwood Rajin Cajun, was the foundation stud for Gogees Cattery and one of the best known foundation Bengals in the breed.

Nola Kotton Pickin of Gogees, became the foundation sire for a whole new line of colors in the Bengal world: the Snow Bengal cats.

Today most mink and sepia snow Bengals trace their ancestry back to Kotton Pickin.

Gogees worked hard over the years to have the snows recognized, and they were instrumental in forming the standard for those colors.

In 1993, the Seal Lynx Point, Seal Mink and Seal Sepia colors were granted Championship with TICA. 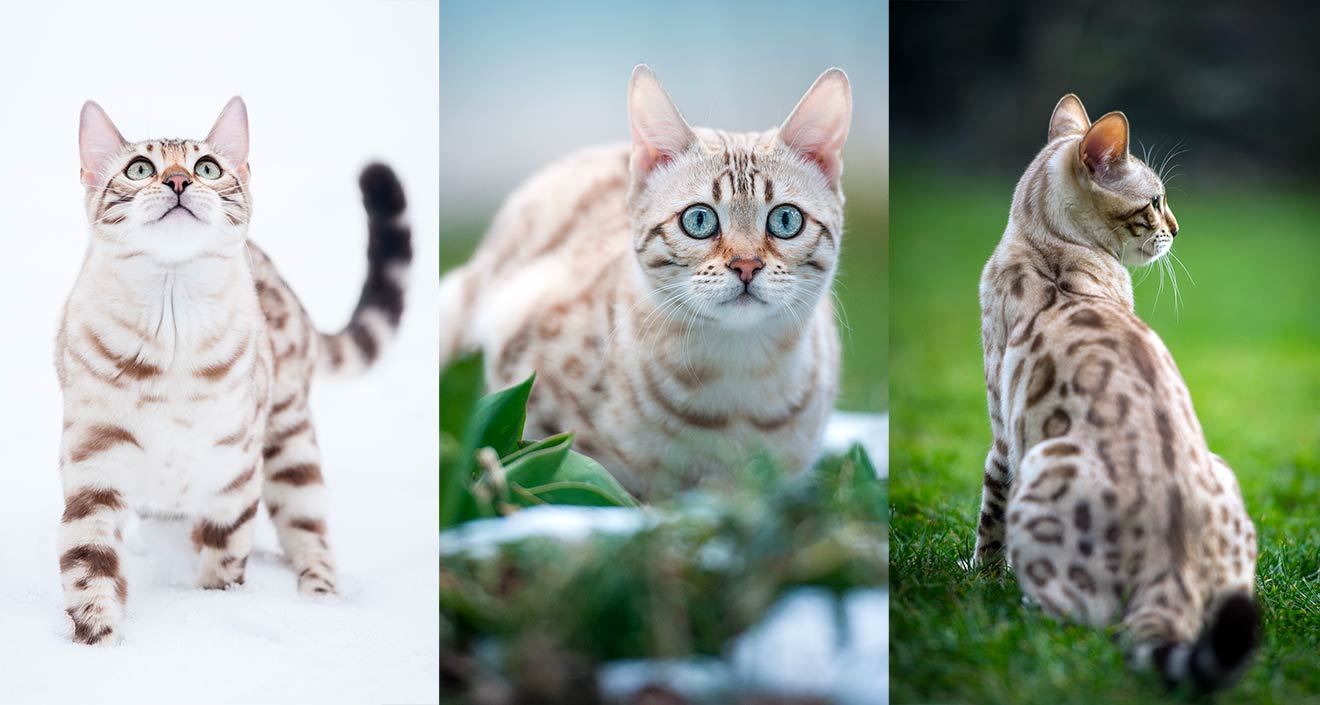 So, there are three distinct different coloring characteristics of snow Bengal cats:

These three groups are very similar in phenotype but they still have unique traits that set them aside from the rest.

What do those unique names mean?

Well, the seal point color pattern is largely found in the Siamese, which is among the foundation stock of several other breeds like the Bengal in its snow version.

The term “seal” refers to the expression of color within the coat of the cat — and “point” refers to the pointed pattern wherein the cat’s extremities (face, legs, tail) are different (i.e., darker) than the rest of the animal. The point pattern is expressed as “lynx” “mink” or “sepia.”

Combining the two names together makes it easier to identify the three different types of snow Bengal cats.

Seal Lynx Point cats have the distinctive “M” on the forehead and other tabby markings on the face, tail and legs. In most other pointed cats, the colored points are solid.

The three variations of the Snow Bengal tend to have warm tones if there is no inhibitor gene present. The dominant Inhibitor gene (symbolized I) or SILVER locus suppress the development of pigment (coloring) in the cat’s hair.

The Bengal standards call for very little or no difference between the color of the body (pattern) markings and point color.

The background color is ivory to cream with markings in varying shades of brown.

The tail tip on all of the snow colors is a dark seal brown.

While some of these differentiations can be difficult to identify, the easiest way to tell the three variations apart is by eye color.

A simple and inexpensive swab test (DNA) can be done to determine if a cat is a lynx, sepia or mink carrier.

However, a well-informed individual can definitely spot these three variations easily since they know what they’re looking for.

Do you want to be able to know what sets each snow Bengal cat aside from the rest? Of course, you do!

Here, we will explore each type of snow Bengal cat and what makes them so unique.

Genetically the Seal Lynx is cs/cs.

Sporting the lightest of the three coat variations of snow Bengal cats, the seal lynx point Bengal is the result of the recessive Siamese gene.

This cat receives two copies of the Siamese albino gene from its parents.

Snow Lynx Bengal kittens are born completely white or with a light pattern.

All Seal Lynx kittens will develop contrast but darker coloring doesn’t appear until they are 1 to 2 weeks old.

If a lynx is bred to another lynx, only lynx Bengal kittens will be produced.

If a lynx is bred to a mink, the litter can be lynx, mink or a mix of both.

But a lynx will never produce a sepia, even if it is bred to a sepia.

The coloring of its coat and markings darken with age and it can take a few months for the final color to finally appear.

The point coloration in extremities, i.e. the face, ears, feet and tail, usually darken first and then the coat markings will follow.

The patterns of a seal lynx snow are a creamy cappuccino color with brown edging around its mouth.

The eye color of a seal lynx point snow bengal is always a bright blue, with a brownish pink nose.

Genetically the Seal Mink is cs/cb.

The snow mink Bengal inherits one copy of the Siamese/Seal Lynx gene and one of the Burmese/Seal Sepia gene from its parents.

Meaning a brown Bengal cat can’t be a carrier for the mink gene.

The mink tabby is usually lighter than the sepia, but not as light as the seal tabby point or seal lynx point.

A snow mink Bengal cat has a white or creme coat with milk chocolate colored patterns. These patterns darken as the cat matures in age.

The eyes of this particular cat are aqua blue, greenish blue or sometimes gold, and its nose is a brownish pink.

Seal minks can produce all three of the snow colors, although the mink color can not be carried.

Genetically the Seal Sepia is cb/cb.

This feline inherits two copies of the Burmese/sepia gene from its parents and is born with a creme or beige coat with chocolate patterns on it.

In the beginnings of the Bengal cat breed, this color was an intentionally introduced into the gene pool from an outcross made to Burmese, to create a more contrasted Snow Bengal.

The Seal Sepia Tabby is most commonly referred to as a “brown snow Bengal.” Be sure to notice that it isn’t actually brown; it is just darker than the other Snow Bengals.

Sepias have gold/brown or green/hazel eyes. If a snow Bengal cat has blue eyes, you know it’s not a sepia.

With white undersides, a black tail tip, and brick red nose leather. Its feet are black.

To differentiate this group from the Snow lynx Bengals, the sepias have darker markings at birth.

Sepia Bengal kittens are born with a visible Sepia-brown pattern and their eyes can range from green to gold.

If a sepia is bred to another sepia, only sepia can be produced.

If a sepia is bred to a mink, only sepias or minks can be produced.

While the above descriptions are for particular variations of the snow Bengal cat, there are a few more special characteristics that make these felines so unique.

Other characteristics of Bengals include a soft, short coat, high levels of intelligence and a constant need for stimulation.

Bengals can grow to weigh anywhere from 6 to 15 pounds, and males are generally larger than females. One characteristic that sets Bengal cats aside from the rest is their physical strength.

If you’ve ever seen a Bengal in person, you may have noticed its coat to sparkle in the sunlight or its spots to look blurry.

If you’re wondering what those specific variations mean and why they’re present, we explain them below.

When a Bengal cat has what is known as “glitter,” it means that the cat’s coat shimmers in the sunlight. This coat characteristic should not be confused with the typical shine found on a healthy cat coat; it’s actually quite different.

The cat, in particular, has a crystal colored glitter characteristic. In the sunlight, the fur looks as though it had been sprinkled with tiny specs of a crushed up crystal. The result is a beautiful sight to see!

The result of the glitter characteristic is a beautiful sight to see! This is one of the most notable characteristics of Bengal cats in general.

Fuzzies are characteristics that are present on a Bengal cat’s coat from infancy to around 16 weeks of age.

A fuzzy is a long guard hair that sticks out from a baby Bengal cat’s coat. In the wild, a guard hair would help protect an infant feline from predators by helping it be camouflaged in the wild.

Although some fuzzies can be a sore sight for eyes (they are sometimes referred to as “fuzzy uglies”), it’s important to remember that they are only temporary. Once the cat is around six months old, the fuzzies are gone and the beautiful coat is revealed. 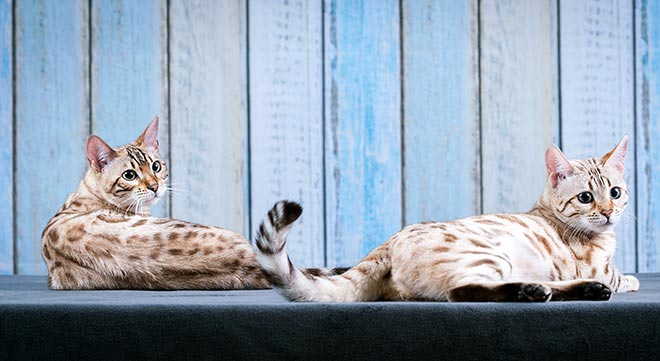 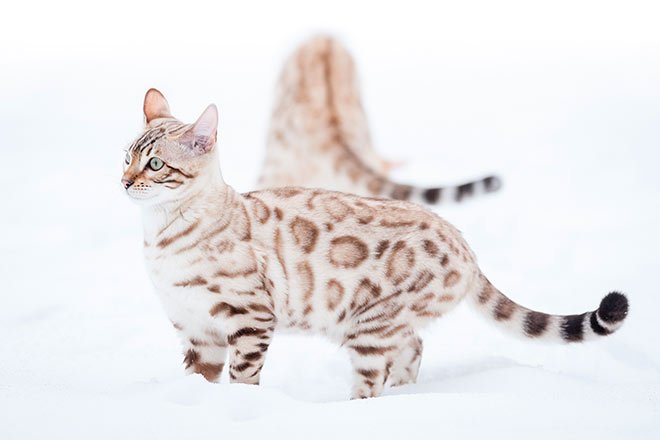 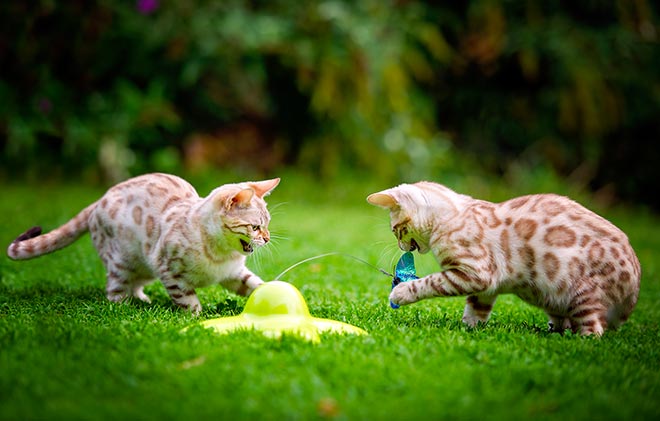 Overall, snow Bengal cats are extraordinary felines that are quite unique from any other breed.

Not all of these cats are the same, either; there is the mink tabby, sepia tabby, and seal lynx point. These variations of the cat species all have unique coloring and markings that set them aside from the rest.

If you’re looking for more information on your furry friends (or just want to look at beautiful photos of cats all day!), we are always updating our website with plenty of information to satisfy your curiosity.

To learn more about Bengals, check out our other informative articles in the Bengal cat breed section