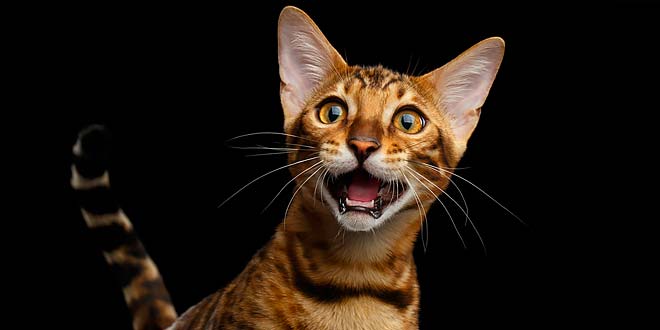 Well, you aren’t the only one. Over 30% of American households own at least one cat. This may be the reason why cats go viral on the internet!

As much as we love cats, we find it hard to decipher their language. The language of cats has been a mystery to humans since ancient times.

The Ancient Egyptians were the first to domesticate cats. They considered the animals to be sacred. In fact, the goddess of fertility and motherhood, Bast, was a cat goddess.

Archaeologists discovered many cats and kittens in Egyptian tombs. Egyptians mummified the furry animals along with members of the royal family.

While ancient Egyptians considered cats sacred, people in the middle ages hunted cats down. Why? Because some religious authorities claimed cats were witches in disguise.

Today, however, cats are not considered sacred nor evil. Instead, we see them as friendly creatures who shower us with love.

In this article, we will discuss Bengal cats noises and how they use it to communicate with us. If you want to know more about your Bengal cat or are considering buying one, read on.

The exotic looking Bengal cat is the result of interbreeding wild cats with domestic ones. It turned out to be a match made in heaven.

Even though the Bengal cat looks “wild”, resembling leopard’s fur, it is completely domesticated and not aggressive at all.

The eyes of the Bengal cat are a bit larger compared to most breeds. Also, they tend to be mostly either green or blue.

Bengal cats are also bigger than the average cat. The average weight for a male is between 9-14 lbs, while females weigh around 8-12 lbs.

The fur of Bengal cats is usually light brown or white, with many stripes on it. There are a few problematic behaviors that Bengal cats may exhibit, but it’s nothing to lose sleep over.

Bengal Cat Noises and Their Meaning

Cats are actually quite capable of communicating, similar to birds and dolphins. Additionally, their language is quite complex.

For instance, dogs produce 10 different noises, while cats produce about 100.

Also compared to dogs, cats have twice as many neurons. This is why many specialists believe cats are capable of sending messages through noises.

The meow is the most common sound all cats make, not only Bengal ones. It’s a sound cats mostly use to communicate with humans, not other animals.

A meow usually means that a cat needs attention, food, or perhaps is waiting for you to open the door.

An interesting aspect of domesticated cats is that they believe they are kids. They aren’t faced with the same obstacles that a wild cat face.

One of the first Bengal cat noises a kitten makes is a meow towards its mother. However, domesticated cats keep the same language as they get older too, while wild cats lose it.

Some Bengal cats make this noise to greet their owners, too.

In some cases, a prolonged meow can signify loneliness or even pain.

Bengal cat noises in older cats could mean anxiety, while in younger ones could indicate hunger or loneliness.

Quick and short meows are usually cries for affection and attention. Conversely, long meows can signify that your cat is either annoyed or in pain.

If your cat is purring, you can be sure that it is quite happy. Furthermore, if your cat purrs while you pet it, then it means it enjoys your presence.

Purring is a form of communication, often associated with positive situations: grooming, relaxing, nursing and being friendly.

Domestic cats purr with a consistent pattern at a frequency between 25 and 150 Hertz. Some researchers believe that purring has a therapeutic effect for pain relief, wound healing and even bone growth. The vibrations can help them breath better, repair muscles and reduce swelling.

However, if your cat’s body is tense and she starts purring it can also mean it is anxious.

If you want to keep your cat happy (and maybe away from chewing on your furniture) you should give catnip a try.

Perhaps you heard about catnip before. It also goes by cat’s wort or catmint. The plant is rich in volatile oil that contains a chemical that simply makes your cat blissful.

Not all cats are responsive to catnip. Also, only adult cats have a response to it. But the cats who do have a sensitivity to catnip do not develop a tolerance to it over time.

Cats will respond to catnip over and over again. It’s safe to reward your cats with catnip. You can even sprinkle catnip oil over your cat’s toys. Best of all, it will make your cat purr in happiness.

If you hear your cat hissing, the message is clear: it is ready to go to battle, and nothing should get in its way.

These Bengal cat noises usually surface when a dog is around your feline and it feels threatened.

Along with the hissing, you usually spot puffed hair. Also, your cat might show its fangs and arch its body.

Aggressive behavior in a cat is usually a sign of abuse. Often, you will also find this trait in stray cats, who are more likely to feel in danger compared to house cats.

If your cat is social and happy in general, you won’t hear it hiss much. On the other hand, if you bring in a cat from the streets, it will likely be more aggressive.

The yowl is one of the Bengal cat noises often mistaken for a meow. But a yowl is a longer meow that usually means worry or anxiety. Sometimes it is a mating call.

A yowl is not a happy sound. When your cat does it, you shouldn’t try to pet it. Every now and then, an older cat may make the noise because its cognitive abilities are lacking.

A constant longer yowl could also be a sign that your cat is going through pain.

If your cat keeps yowling a few days in a row, and there is no sign of a stray cat outside that might upset it, talk to a veterinarian as soon as possible. There could be something very wrong with its health.

If you do have a stray cat around your house, make sure your indoor cat doesn’t feel ignored. This could be also a cause of yowling. Give it plenty of toys to play with.

Growls-Not as Scary as a Tiger

Growling is usually accompanied by hissing and an arched body. It is used as an attempt to intimidate potential threats.

Growls are one of the Bengal cat noises that sends a clear message. It indicates your cat feels it’s in danger. Most of the time, it will likely be another cat, or it could be a dog.

Growling is common in larger felines, such as tigers. But your domestic cat’s noise is going to be a higher pitch, and it might end in a sad sounding yowl. It may also throw you for a loop.

These Bengal cat noises come with very aggressive body language and you should figure it out what makes your cat behave like that.

The same situation as the one described above with yowling. If you have a stray cat outside, make sure you give her to adoption or bring it into your house (while showing love to your other cat, of course).

Believe it or not, cats feel “cheated” too. Like humans, they crave attention and love. There are cats who simply cannot live with another cat in the same room without hissing at it.

These cats usually experienced many threats in the past. They may have also lived their lives as strays. Unlike cats that were always shown love, they are more territorial.

Some Cats are More Talkative Than Others

Usually, cats who have a shorter hair tend to make more noises than ones who have longer hair. This isn’t an absolute rule, but you can use it as a guide.

Sure, each individual cat has its own personality. However, if you are searching for a chatterbox, you should look at Asian breeds.

Siamese cats are among the noisiest, while Persian and Russian Blue breeds are among the most silent. Make sure to keep this in mind when you choose a new pet.

Bengal cats are usually noisy, and they like to communicate quite a lot. On the bright side, they aren’t as needy as many other breeds of cats—but they are quite energetic.

If you love cats, you most likely want to know what they are thinking or how they feel about you.

By trying to listen to the noises a cat makes, you can figure out what messages she wants to get across. Think of it as a way to get closer to your cat.

I hope you found our list on “Bengal cat noises” helpful. If you want to find out more about Bengal cats noises, and cats behaviors in general, don’t hesitate to check out our articles for more information.

January 10, 2023
Previous article
The Unusual Friendship Between A Bengal Cat And An Otter
Next article
Video Of 2 Bengals Arguing Over Milk With Added Voice Over