The 11 Most Expensive Cat Breeds In The World [ads1][dropcap]W[/dropcap]e know you love cats, but how much money are you willing to shell out for a new furry friend?

Your typical American Shorthair cat can cost up to $800, and that is not counting all the wonderful ones waiting to get adopted.

The average American cat owner spends a little over $1,200 a year on expenses for their beloved feline.

However, that cost pales in comparison to the amount required to get your hands on one of the most expensive cat breeds in the world. Here is a hint: it would cost you at least 20 years of expenses to buy one.

So, what are the most expensive cat breeds, and how much do they cost?  Keep reading to find out!

The World’s Most Expensive Cat Breeds 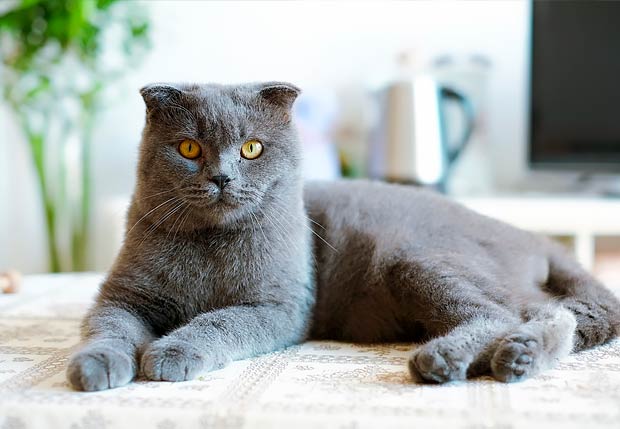 We kick off our list with a cat that dates all the way back to the first century.

The British Shorthair is a lot rounder than its American counterpart. It has an adorably chubby look.

Most recognize this breed for its wide face, bluish-gray fur, and copper eyes. However, it comes in many different colors.

British Shorthair kittens can cost anywhere between $800-$1,000, making them the most affordable breed on this list.

These cats can be extremely quiet, but they enjoy showing affection. However, they are not always very receptive to strangers.

For the most part, they are very easy-going and laid back. Furthermore, much like its appearance indicates, British Shorthairs are not the most active or energetic cats. 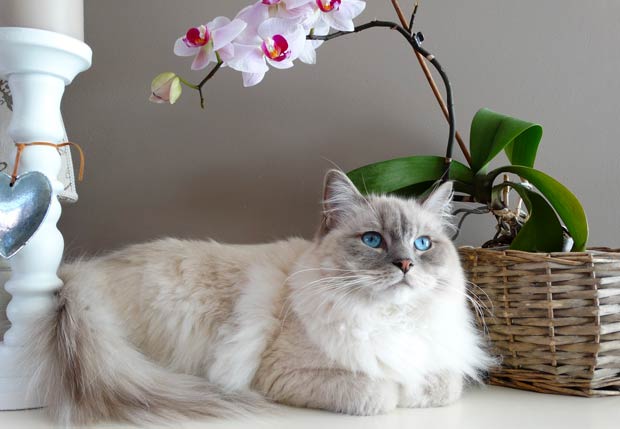 The Ragdoll barely sneaks into the top 10 on our list of the most expensive cat breeds in the world.

Ragdolls are a fairly new breed, originating in the UK in the 1960s.

Many people compare Ragdoll cats to dogs due to their behavioral tendencies. These cats enjoy following people around. They also interact with humans very well.

Ragdolls are almost always relaxed and rarely on edge. They can show plenty of affection, and they get along well with other animals.

However, Ragdolls possesses a genetic mutation that can lead to a condition called hypertrophic cardiomyopathy (HCM), which refers to the excessive growth of the heart.

The American Curl, as its name suggests, originated in the west coast of the United States in the early 80s. In fact, the first documented American Curl was actually a stray cat.

A distinguishing physical feature of the American Curl is its curly ears. This is a result of a random mutation.

Personality-wise, the American Curl is extremely affectionate and enjoys being around humans. Additionally, it normally gets along with fellow cats as well.

The breed tends to be intelligent and does not vocalize as much as many other breeds do. 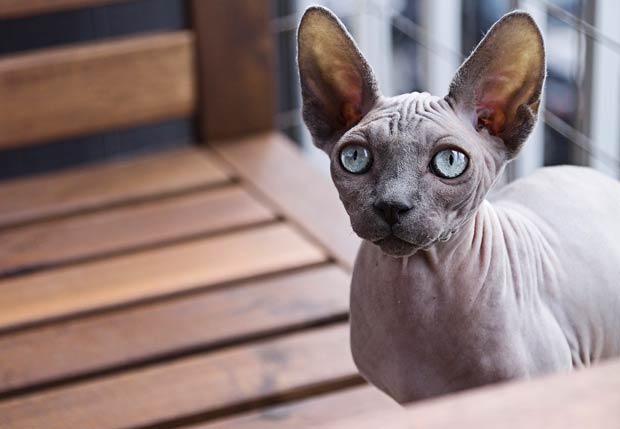 Despite its name, the Sphynx cat does not originate from Egypt.

In fact, the Sphynx cat originates in a place that is almost 6,000 miles away from Egypt: Toronto, Ontario.

This breed is easily recognized for its hairlessness. This baldness comes as a result of a recessive gene.

Sphynx kittens usually sell for about $900-$1,200, putting it near the outer edge of the top 10 on our list of the most expensive cat breeds.

Sphynx cats are beyond affectionate. They absolutely adore socializing and can be very receptive to strangers.

However, Sphynx cats can often require bathing, as they tend to accumulate of body oils on their skin. Additionally, these cats do not fare well outside.

This is by far the saddest looking critter on our list of the most expensive cat breeds in the world.

As the name implies, Scottish Folds originated in Scotland, sometime around the early 1960s.

This breed can be easily recognized for its folded ears. This is caused by a dominant gene that impacts the cartilage in its entire body.

Despite their melancholy appearance, Scottish Folds are far from depressing creatures.

Health can be something to worry about with the Scottish Fold, as it is prone to degenerative joint issues.
[ads2]

The first Russian breed on our list of the most expensive cat breeds in the world is the Russian Blue.

This breed is often known as “the Archangel cat,” as it originated in the Russian city of Archangel. However, its first notable appearance took place in England in 1875.

Russian Blue cats tend to be quite reserved compared to many other breeds. They often stick to themselves and do not need much social validation.

Despite their seemingly cold nature, many Russian Blues look happy or content. This is because the shape of their mouth tends to resemble a slight smirk.

The Peterbald is a Russian breed that dates back to the late 80s/early 90s.

The first Peterbald came as a result of mating between a Russian Donskoy (Don Hairless) and an Oriental Shorthair.

Much like the Donskoy cat, it possesses a dominant gene responsible for its hairless appearance.

Peterbalds can cost anywhere between $1,000-$3,000, which is why it snuck into the top 5 in our list of the most expensive cat breeds in the world.

The Peterbald is known for its affectionate personality, often claiming a home on your lap. They also tend to be quite intelligent.

However, those who plan to own Peterbalds must play close attention to how children handle the cat, as its skin can be very sensitive.

Additionally, this breed cannot stay out in the sun too long because it is vulnerable to sunburn. 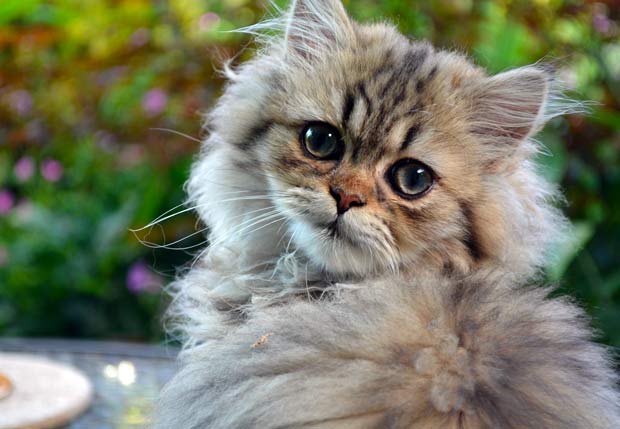 Widely recognized for its fluffy fur and mushy face, the Persian cat originated in Iran (Persia).

Persians are actually one of the older breeds on our list of the most expensive cat breeds, dating all the way back to the 19th century.

Persians enjoy cuddling and showing affection. Furthermore, they are not as vocal as many other breeds.

Due to its long, furry coat, Persians often require daily grooming, including brushing.

Despite the popular image of the white Persian cat, this breed comes in many different colors and variations. Also, it normally weighs as much as your standard American Shorthair. 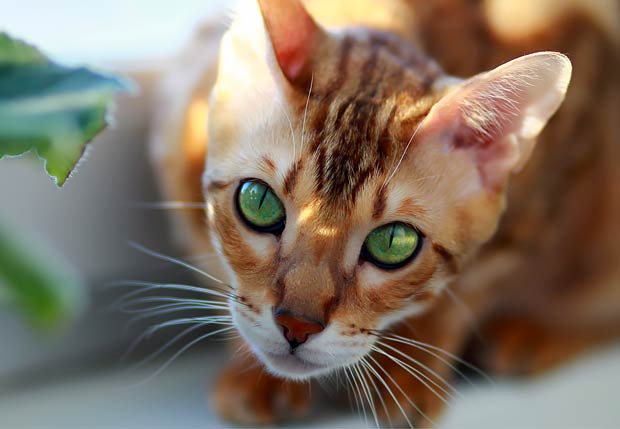 The Bengal fills in the third slot on our list of the most expensive cat breeds in the world.

This lovable breed originated in the 1970s as a hybrid between a domestic cat and an Asian leopard cat. Therefore, you will notice that they tend to be much bigger than your average domesticated cat.

How much do Bengal cats cost? On the lower end, you can buy a gorgeous Bengal for about $1,000. However, some breeders sell them for up to $3,000-$5,000 depending on the quality of their coat, generation, pedigree and other factors.

Bengals are well known for their affectionate personalities. They are very dog and child-friendly, as well as social beyond belief.

Additionally, Bengals are energetic and tend to have an extremely playful demeanor. They often become enamored with their toys and enjoy jumping up on high structures. 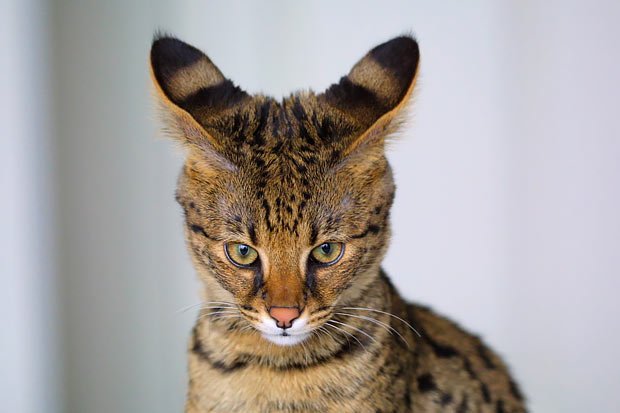 The second place finisher on our list of the world’s most expensive cat breeds is a hybrid between a domestic cat and a Serval, which is a wild feline from Africa.

The price of a Savannah cat primarily depends on two factors: gender and classification.

Savannah cats are very energetic and require a lot of exercise. They are also highly curious and intelligent, and their social skills can be compared to that of dogs.

What would a list be without some controversy? Luckily, the Ashera cat is surrounded by it.

Nonetheless, this hybrid still claims the top spot on our list of the most expensive cat breeds in the world.

What is the reason for this hefty price tag?

Well, it is mostly rarity.  A Los Angeles-based company only breeds about 5 of these gorgeous felines per year. So if you ever manage to get one, you will be among one of the very few to ever own this remarkable cat breed.

Aesthetically, this cat breed looks very similar to a snow leopard in terms of its pattern. Its temperament and behavior resemble that of Savannah cats.

But what on Earth is the controversy that surrounds it?

Regardless, this wraps up our list of most expensive cat breeds in the world.

What Do You Think About These Cats?

Would you ever consider buying any of the most expensive cat breeds? Do you have personal experience with any breed on this list? Leave us a comment below!