Boomer is an adorable Silver Bengal kitten who is owned by renowned dog trainer, Robert Dollwet. While Robert is known for his exceptional dog training skills his cat wrangling is out of this world as well.

Robert adopted a kitten whom he named Didga (short for Didgeridoo) in 2012, and after successfully training her to do tricks most people couldn’t even imagine he decided he was ready to add another feline companion to his family. Robert chose the Bengal because of their high prey drive, intelligence, and trainability, and he named the new kitten Boomer (short for Boomerang).

In this video we get to see Boomer playing in a box full of colorful plastic balls. Robert cuts a small hole in the corner of the box and Boomer is extremely amused by the possibilities this hole offers. He swats at the air outside the box, jumps out of the box and swats the balls through the hole, and he even looks out of the hole directly at the camera.

The overwhelming amount of cuteness in this video doesn’t stop there. As Boomer grows we get to see him graduate to a kiddie pool full of colorful balls, and his acrobatic play style gets even more fun. Like a kid at Chuck E Cheese Boomer leaps into the ball pit and dives through the colorful pool of fun.

Robert films the video with a GoPro and at one point in the video he attaches a plastic alligator to the front of the camera. Boomer pounces on the camera and walks away the victor with the gator in his mouth. As Didga watches from her perch on the cat tree Boomer has the time of his life jumping off everything he can find, even his Weimaraner friend.

Some extra cute shot in the video include Boomer asleep in the ball pit, and him enjoying a little quiet time next to one of his canine friends.

Cats are intelligent and athletic creatures that need lots of exercise and mental stimulation to stay healthy. Since Bengals are an extra special hybrid cat breed they need even more than your average domestic cat, so make sure your Bengal buddy always has plenty of toys to play with.

If you are considering getting a ball pit for your Bengal keep in mind that Robert spent lots of time getting Boomer used to the balls and the box and pool before he began filming the video. While some cats may take to the fun quickly others may prefer other toys to keep them occupied. If you are convinced your cat will love it start off slow with just a few balls and add more as he gets used to it. 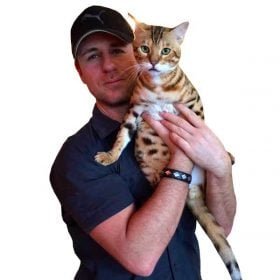 Bengal Greets Her New Parents For The First Time