[dropcap]C[/dropcap]apturing the cuteness of your furry friends on camera is not always an easy task. It seems that at least half of my attempts to capture a beautiful moment with my furball ends in blurry snaps, due to wiggling and running around, and the only moments I manage to get a decent photo is when my spoiled feline decides it’s time to strike a pose.

So, I wondered if there is some secret method or a priceless trick that helps pet photographers take stunning photos of cats and dogs. I decided to go straight to pros, and Amanda from Furry Hearts Photography was kind enough to answer all my questions.

Amanda is an Australian-based pet photographer who started her career taking pictures for an animal rescue organization, wanting to help cats and dogs finding a loving home. A few years later, she’s a full-time pet photographer with an impressive portfolio.

If you’re wondering how to take great photos of your cats and dogs, take a look at some great tips Amanda gave us!

How did you come about being a photographer and how long have you been doing it?

I wasn’t one of those photographers that grew up with a camera in their hand, I came to this form of expression later in life in 2012 at the age of 33. I quickly fell in love with the art and gained my skills through obsessive self-learning as well as a doing photography for a semester at university while studying for my psychology degree. 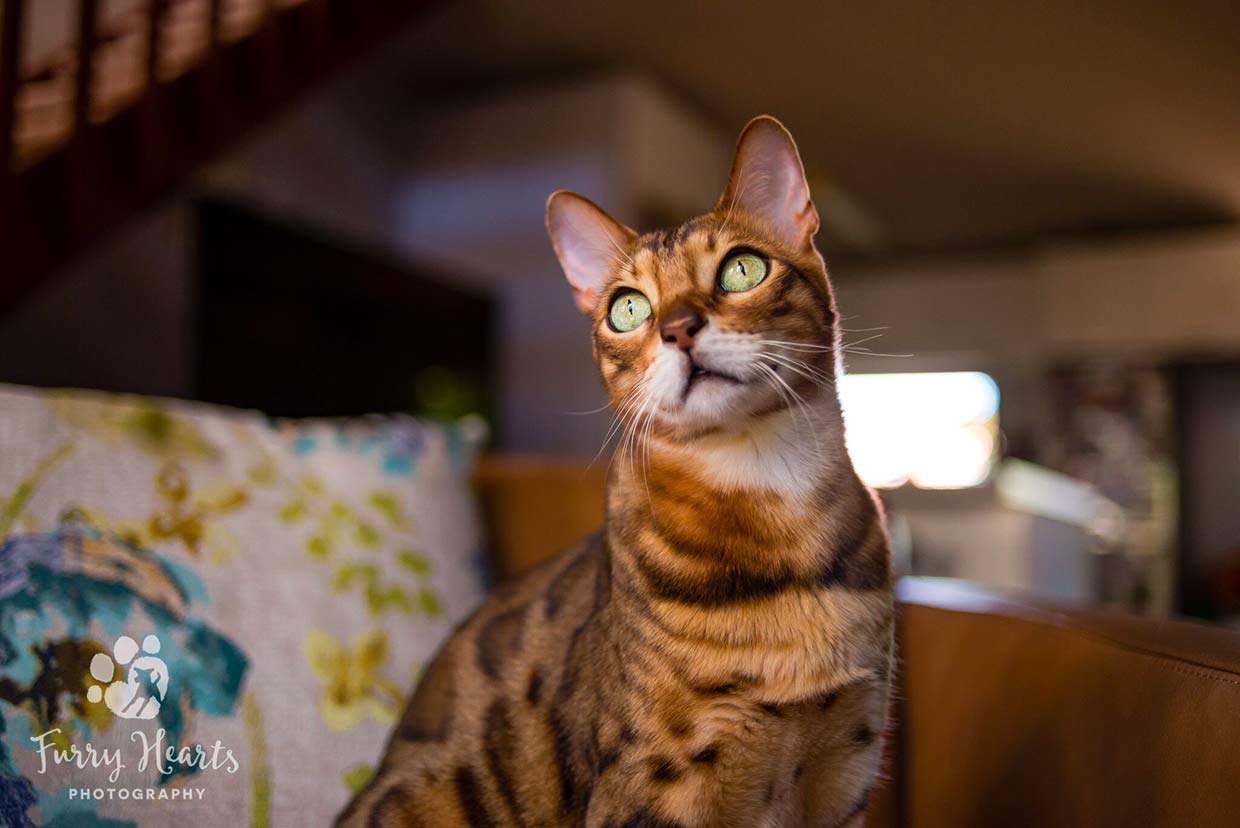 How did you get started photographing pets?

In late 2013 I started fostering for an animal rescue organisation and simply started photographing my foster animals for their adoption profiles; I was always taking photos of my own and friends animals anyway so it was a natural thing to do. I then offered to take photos of other carer’s foster animals, as they often struggled to get good adoption profile photos with their phone. The demand for my services grew rapidly from there.

I am thankful that my start in this field was through working with rescue animals, it’s a kind of trial by fire. People often worry that their pet won’t be well-behaved enough for a photo shoot and I can confidently say that I have pretty much seen it all. Every single pet has their quirks no matter where they have come from. I have even done photo shoots with declared dangerous dogs and they were smooching lap dogs by the end of it. It takes a fair bit to surprise me as far as animals go, and even better I don’t need a pet to be highly trained to get a beautiful portrait of them.

By 2016 I was ready to leave my fulltime day job and put my all in to pet photography as a business, now almost a year later, it is easily one of the best decisions I have ever made.

What are the essential qualities for a successful pet photographer?

This might sound obvious, but you need to love animals. Animals have a sense for those that dislike them or are fearful and they react accordingly. A close second is respect for the animal and creating an environment of mutual benefit rather than trying to dominate.

From a technical point of view, working with animals can be very fast paced and you can’t always repeat great moments. So, knowing your gear and being able to adjust settings without looking is a great start. Also, being familiar with animal behaviour enables you to anticipate and smoothly improvise in response to their antics. 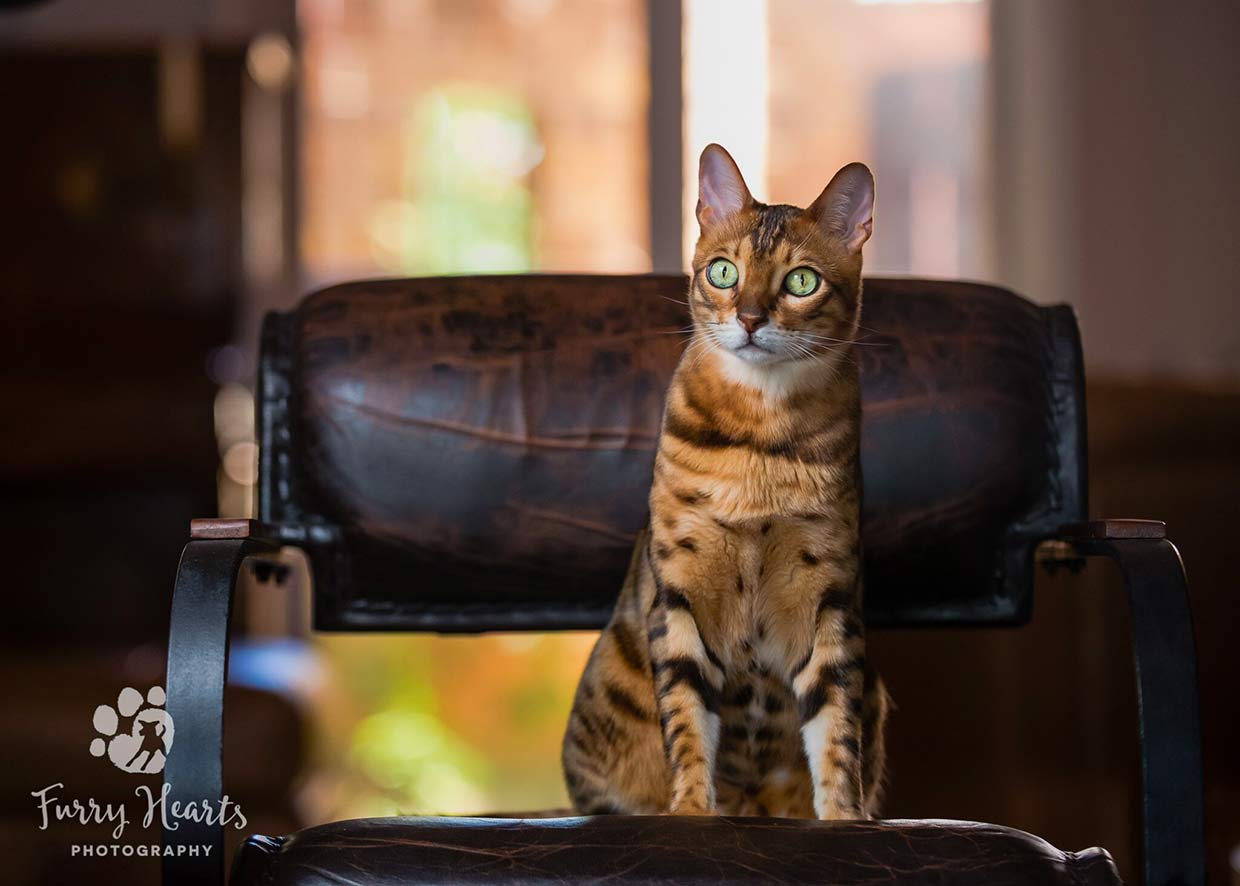 When was your first interaction with a Bengal and how different was it compared to other pets or cats?

My first Bengal client was only recently actually and he was a four-year-old called Bazooka. Bazooka’s dad Mike is the cat lover while Mike’s wife Molly was a self-described “dog person”. The Bengal breed was chosen by the couple as a type of compromise as the Bengal was said to have quite a bold personality and can be walked on harness. While Bazooka never did like learning to walk on harness Molly was well smitten regardless, and of course Bazooka is doted upon by his dad Mike.

During the photoshoot we were even joking around trying to get Bazooka to ‘sit’ and ‘lay down’ with the aid of treats, which to Molly’s surprise he responded quite well to. Sometimes though he did try to go straight to the hand with the treats rather than waiting.

When meeting Bazooka I found him to be a delightful combination of inquisitive aloofness. He had to investigate everything (including me) yet it was all on his terms so I daren’t try to go in for an unauthorised scratch. He was very happy to allow me in his space and wasn’t intimidated by the camera in the slightest, all in all he was a great personality. Bazooka was comfortable both doing his own thing while I shadowed him with the camera, as well as staring me straight down the lens barrel for some great front-on portraits. It was a fantastic session and left me keen to photograph more Bengals.

What’s your biggest challenge when it comes to photographing animals and Bengals in particular?

With any pet, what I strive for is to be able to capture the unique personality of that animal. It could be an odd quirk of the ears, a certain expression, a posture… anything. It’s those little things that we as pet owners see and enjoy in the quiet moments with our furry loved one. Drawing out the details of the owner/pet relationship through questions and conversations, then seeking those moments with my camera is both challenging and exhilarating.

Bengals can be interesting in that they appear to be somewhat distant when strangers are around, even though their owners know the meaningful ways that they show their love. Being patient enough that the Bengal has become accepting (if not totally comfortable) of my presence and then encouraging owner interaction to reveal some of those more natural expressions and postures is a must. 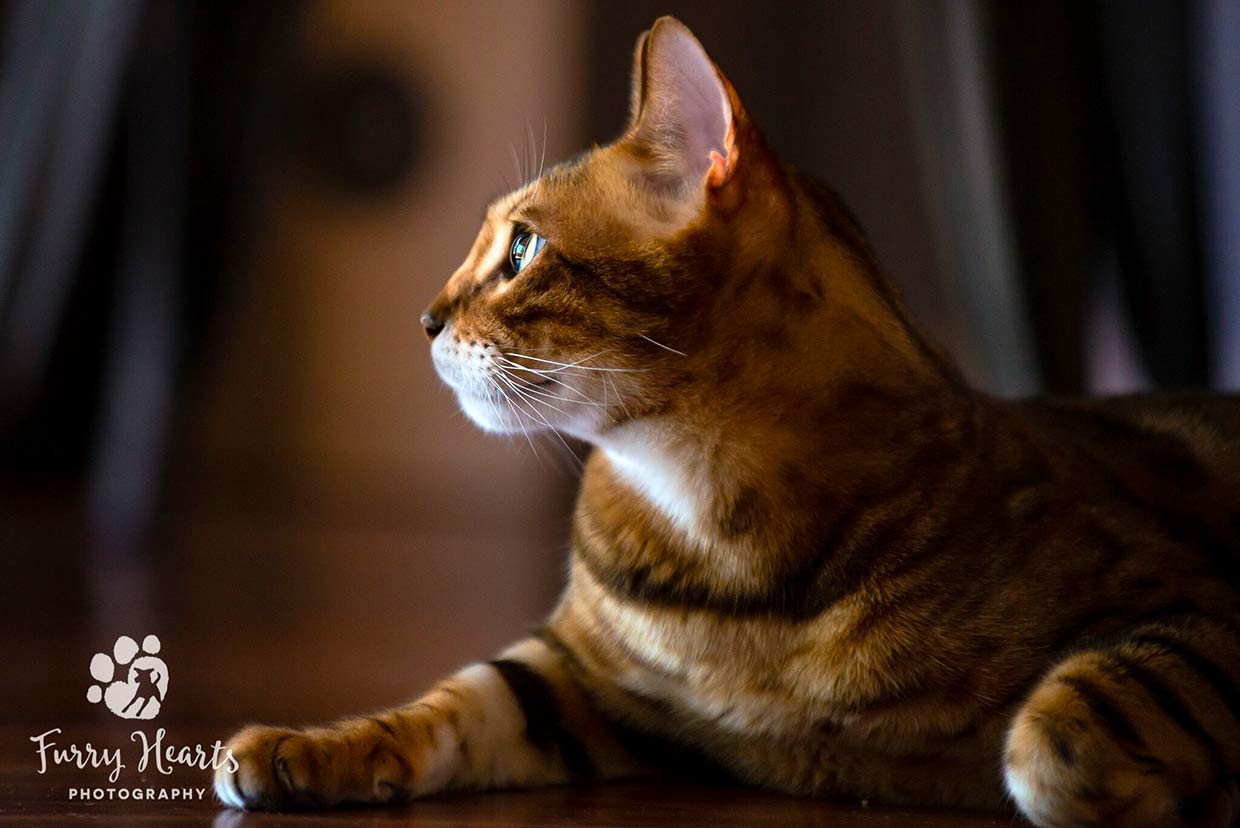 How do you get the animals to “pose” for you? Is it important to bond with each pet before photographing them?

My style is a combination of lifestyle, almost candid looking, photography and what I call “gently posed” which is me guiding the pet (or their handler) into a suitable position and ensuring the pet is relaxed before making a noise to grab their attention so they look at the camera. Even if they aren’t looking straight at the camera that’s fine too. I just love all the different angles of an animal and they never complain about having a “bad side”. For the most part my animal interaction tends to be very responsive, with the photo shoot punctuated by plenty of play breaks, I am always trying to be aware of the needs of the animal and adjusting things to suit.

Do you have any tips on how an amateur photographer can create his own successful pet shoot?

My number one tip for people trying to photograph their pets at home, whether it be with a phone or a DSLR, is to look for the best light they can find and start there. You don’t necessarily want direct sunlight on your pet, but a large window with plenty of indirect light works wonders. Face the pet so their eyes are reflecting that light and either stand between them and the window or just slightly to the side to capture the photo. With the example of Bazooka below, I had placed him on a chair in front of a window at a slight angle while I was crouched down in front of him. The darkened room behind Bazooka made him almost glow in that puddle of window light. It’s a very simple, but effective, go-to that anyone can try. 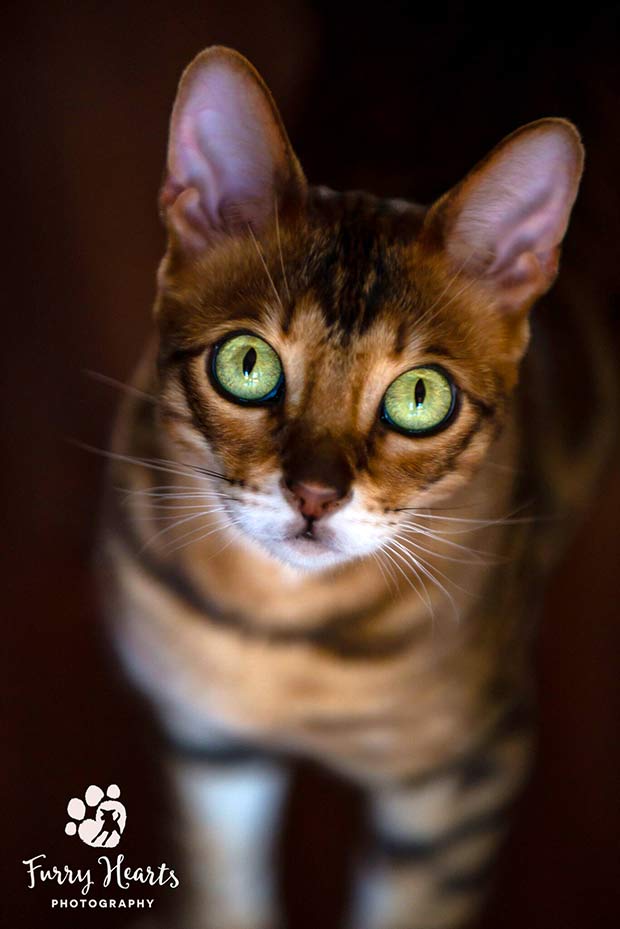 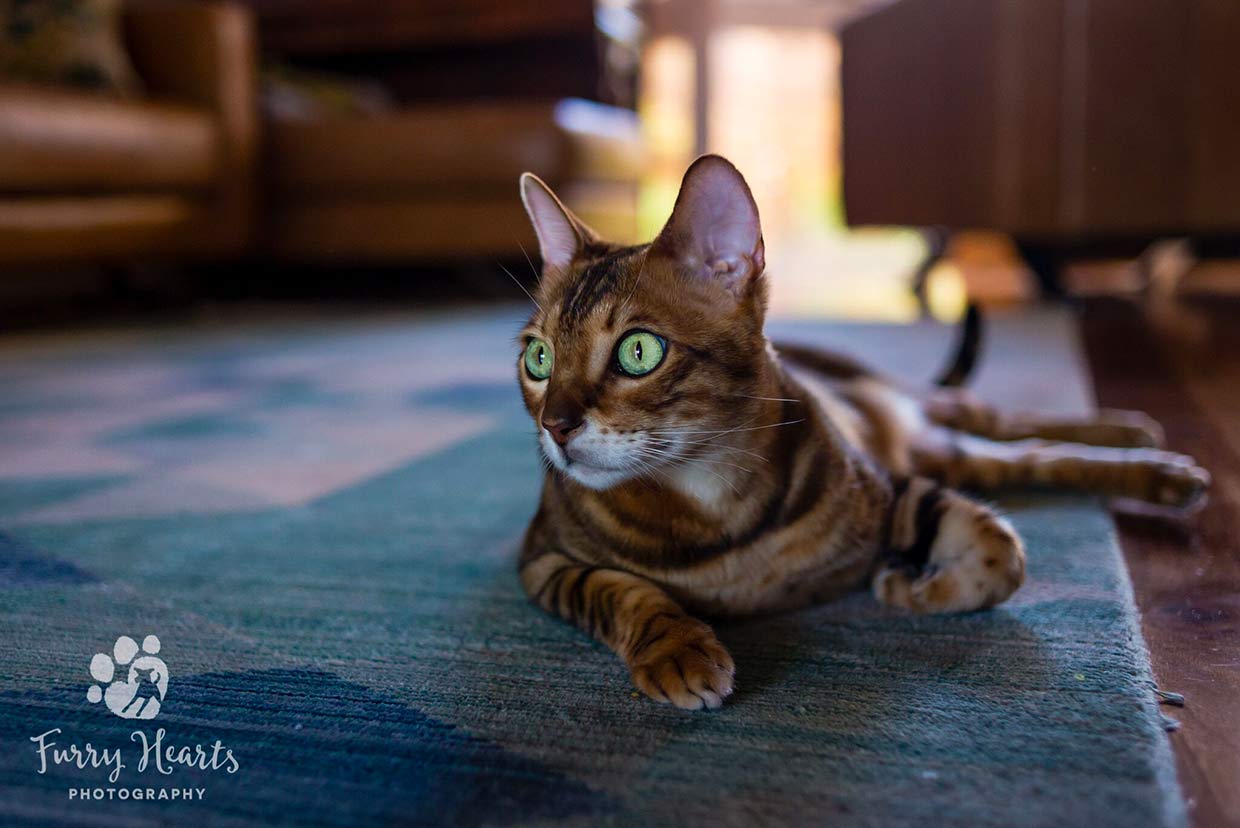 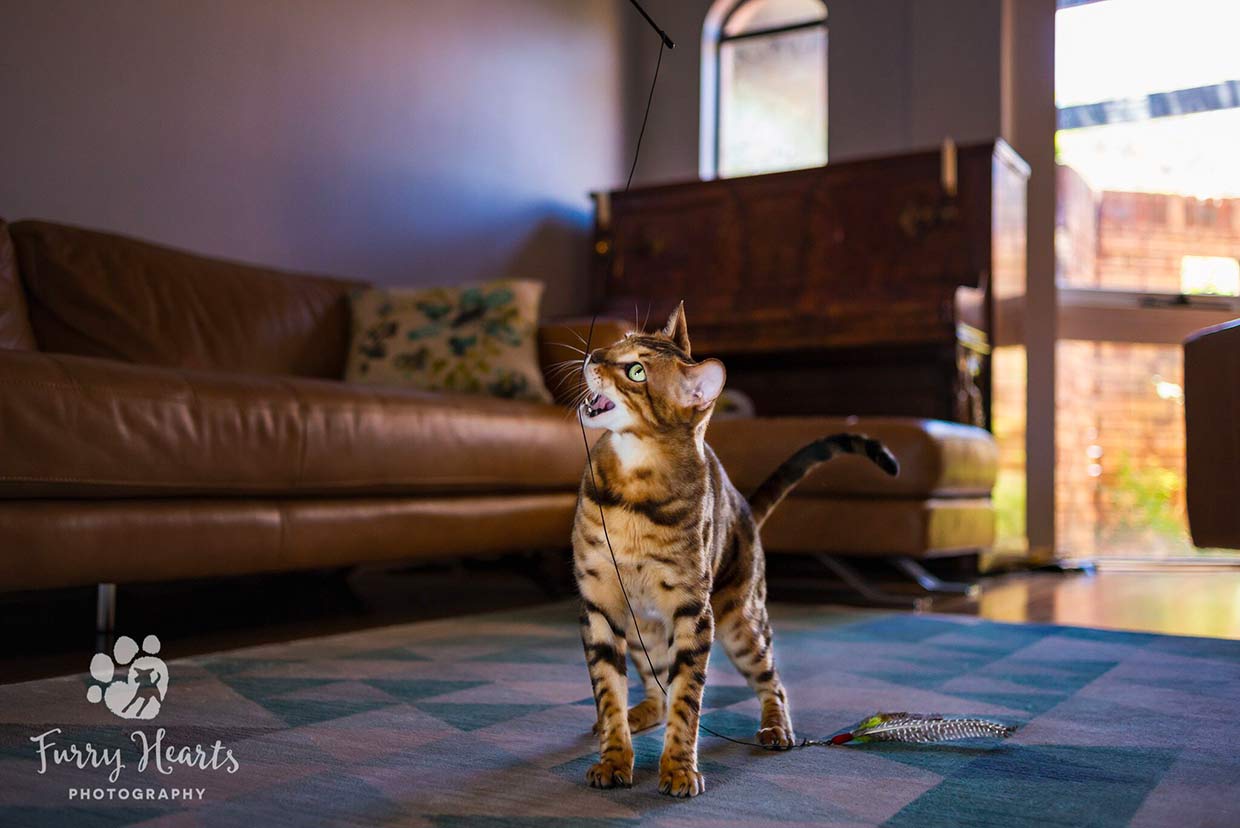 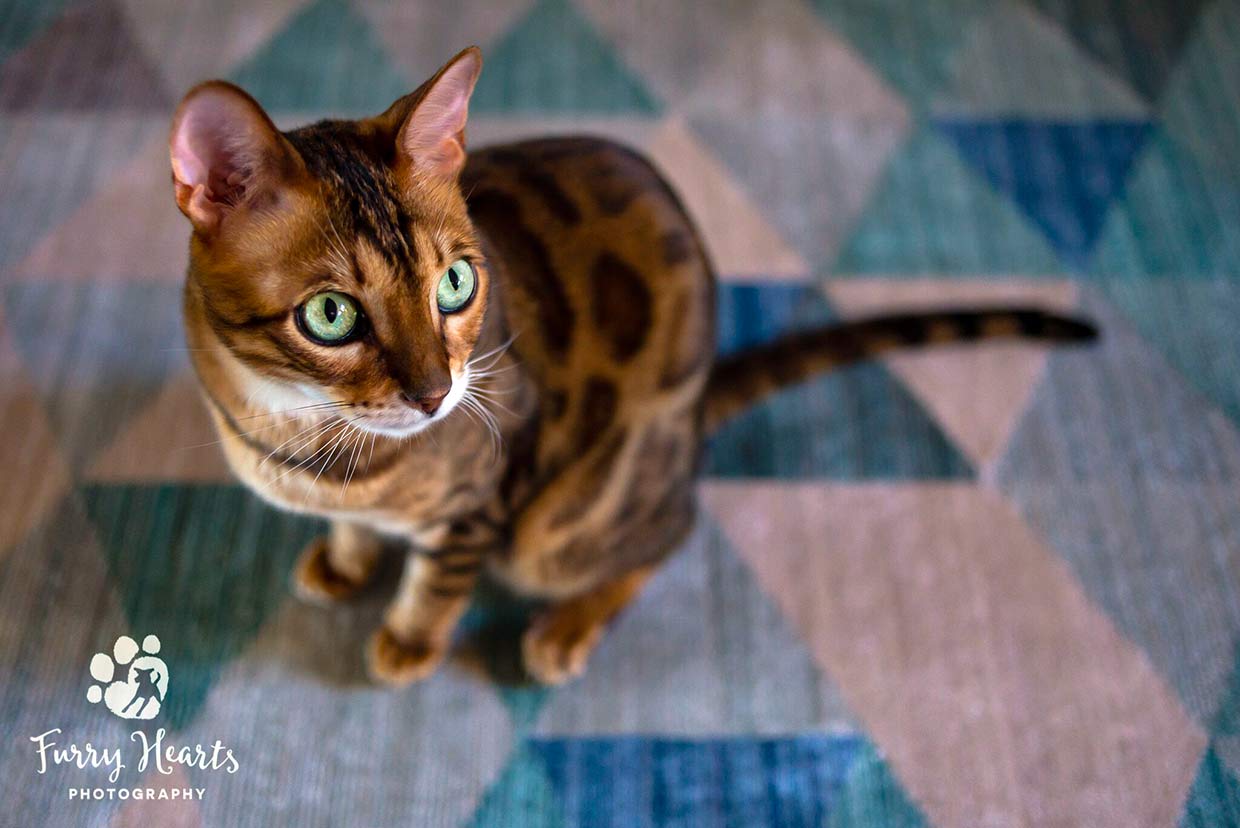 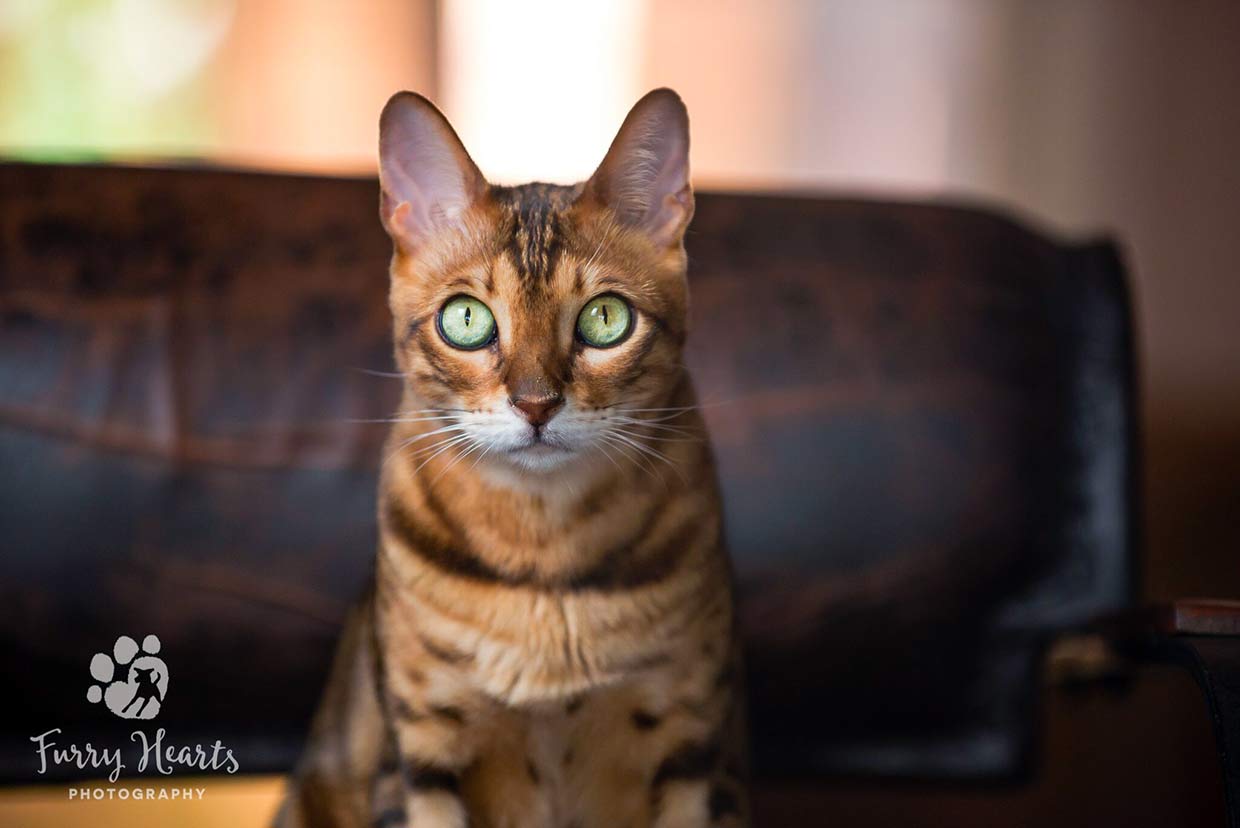 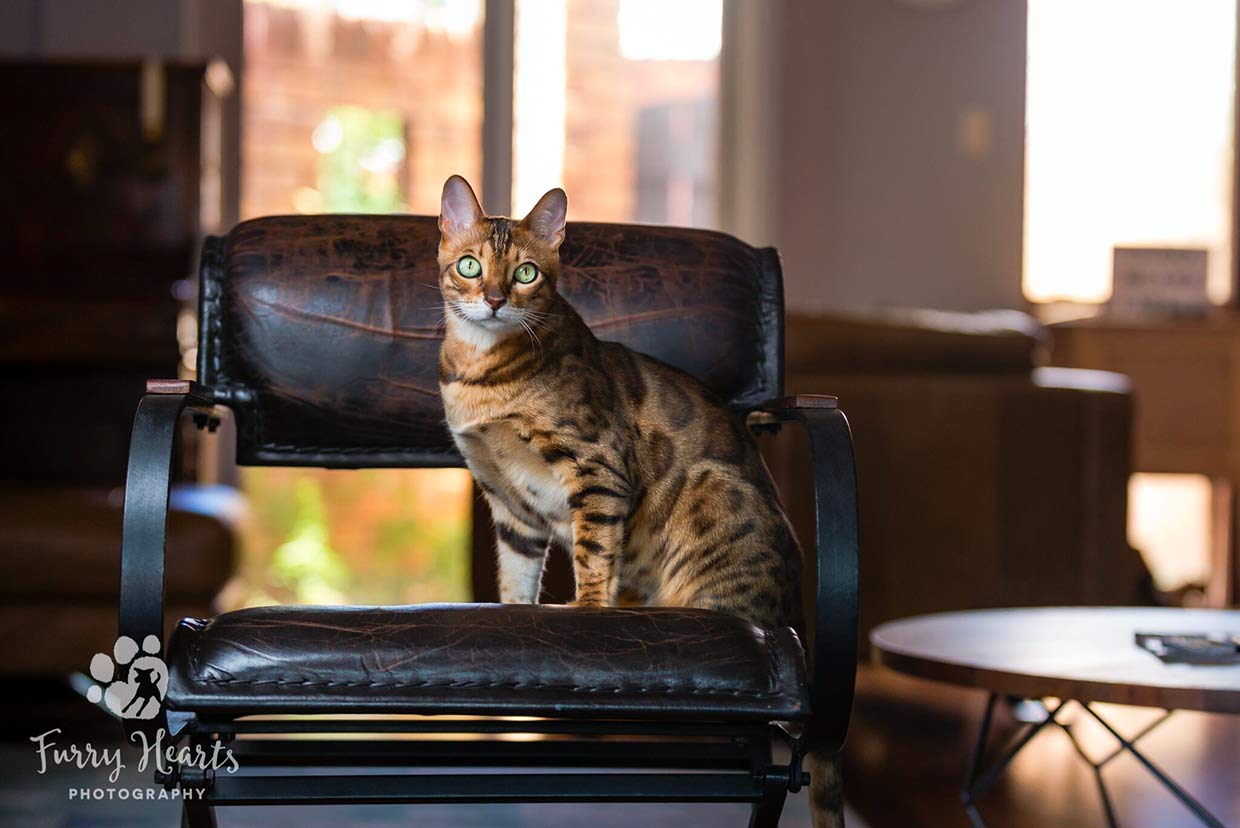 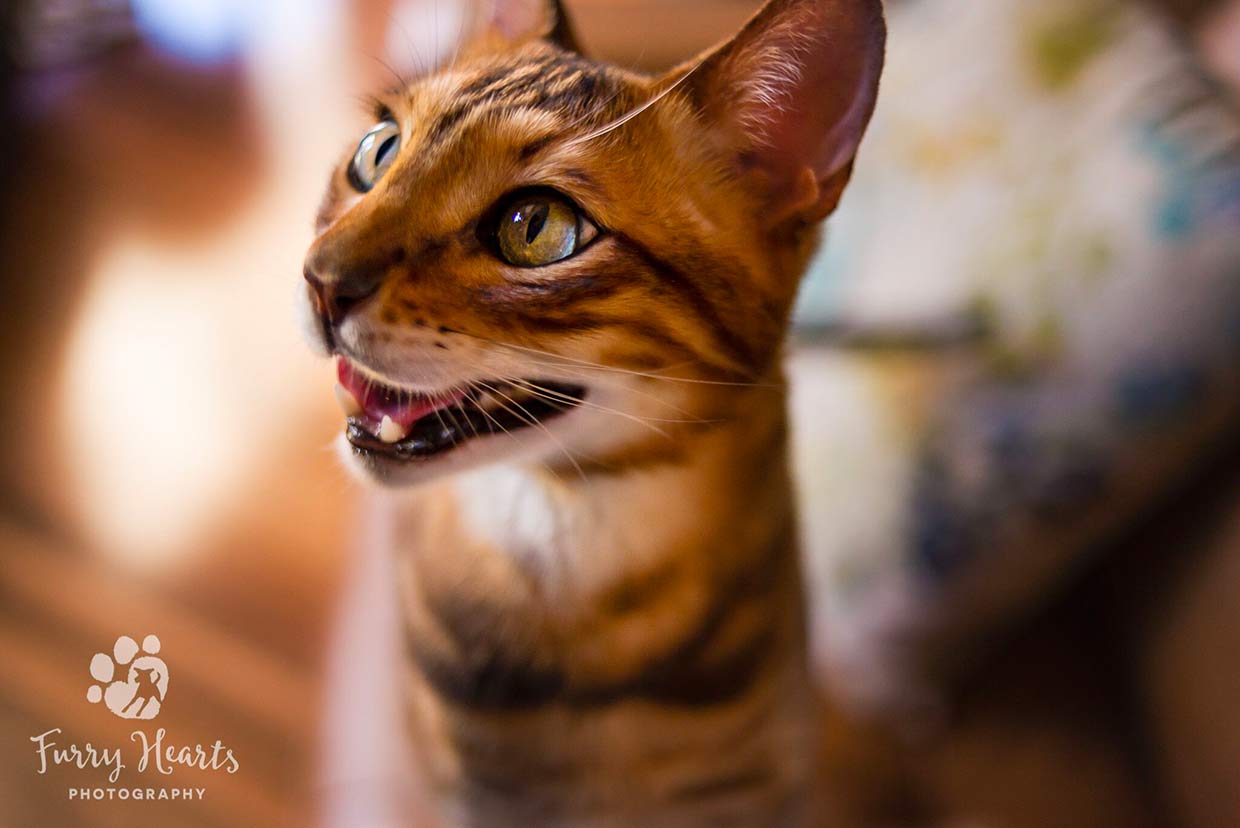 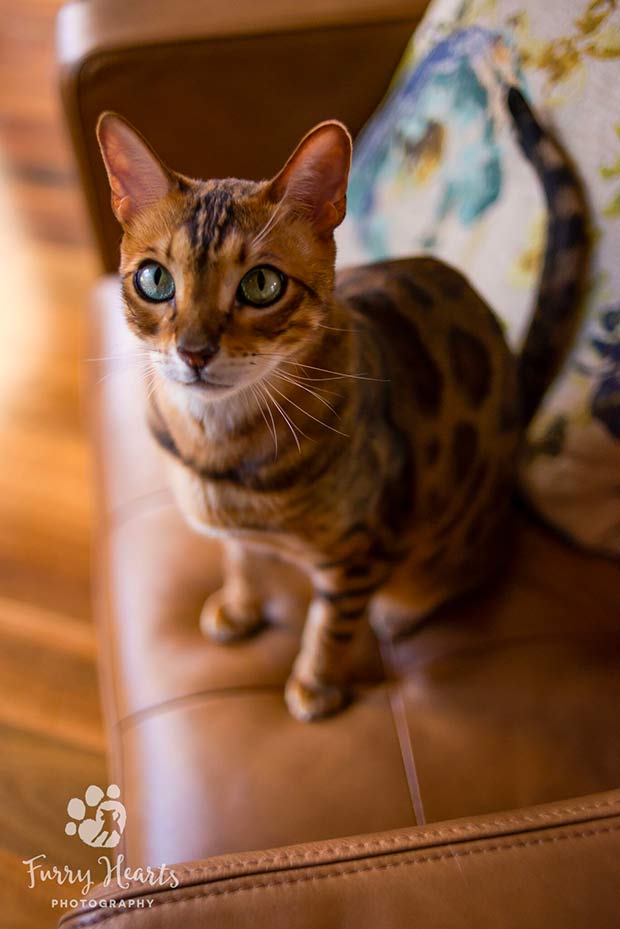 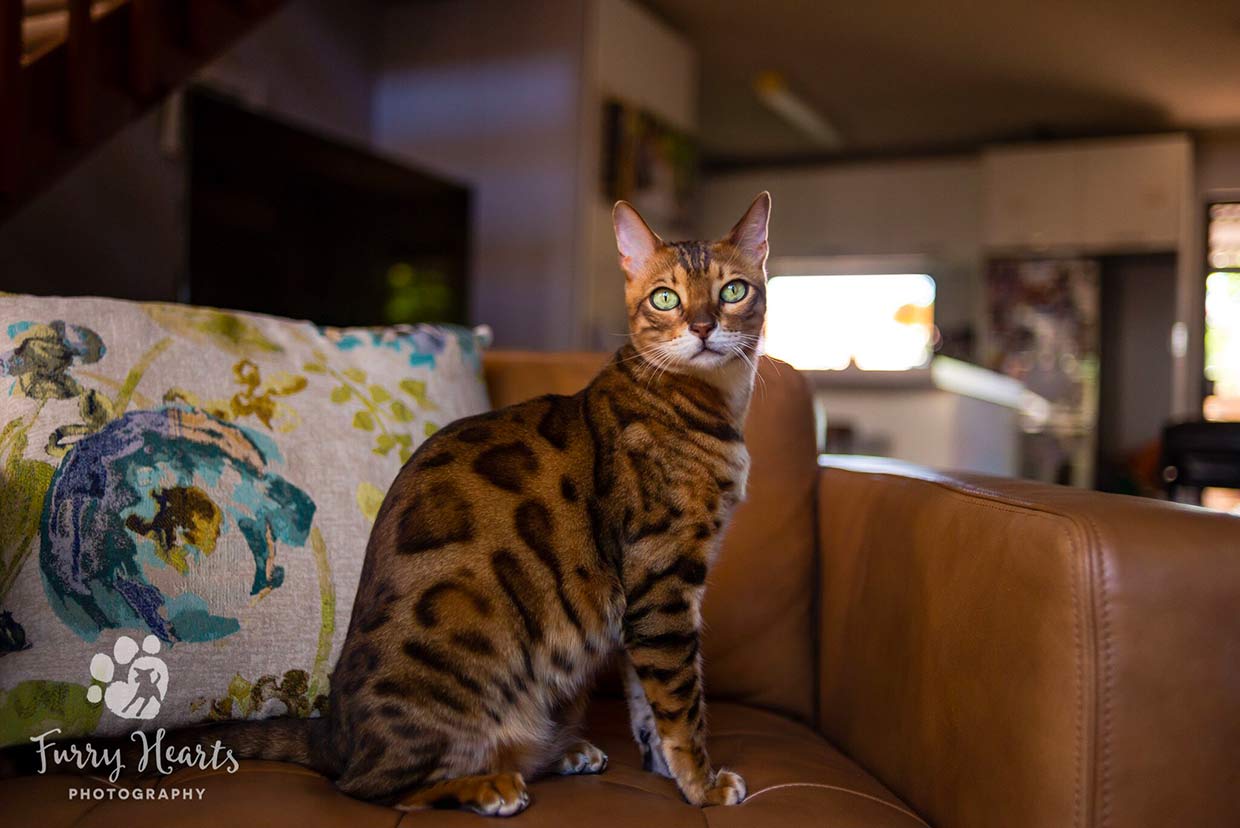 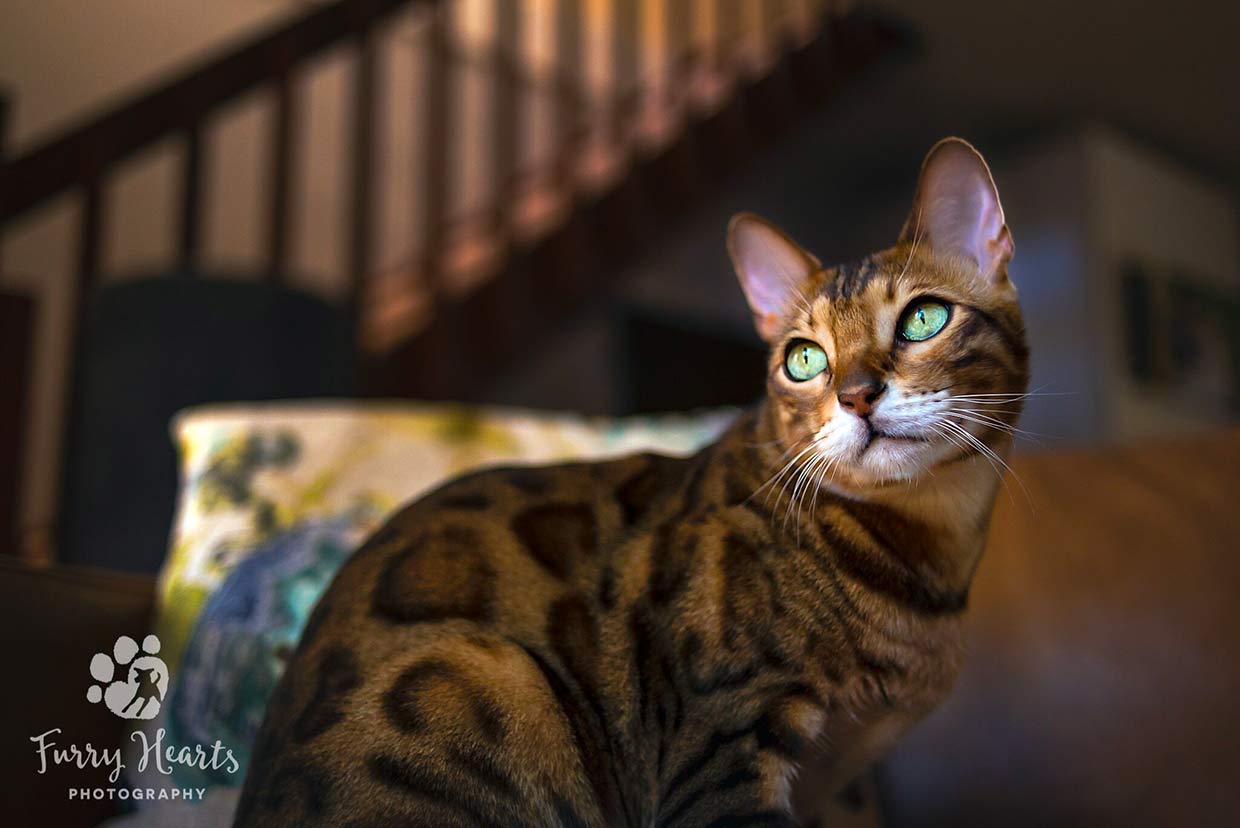 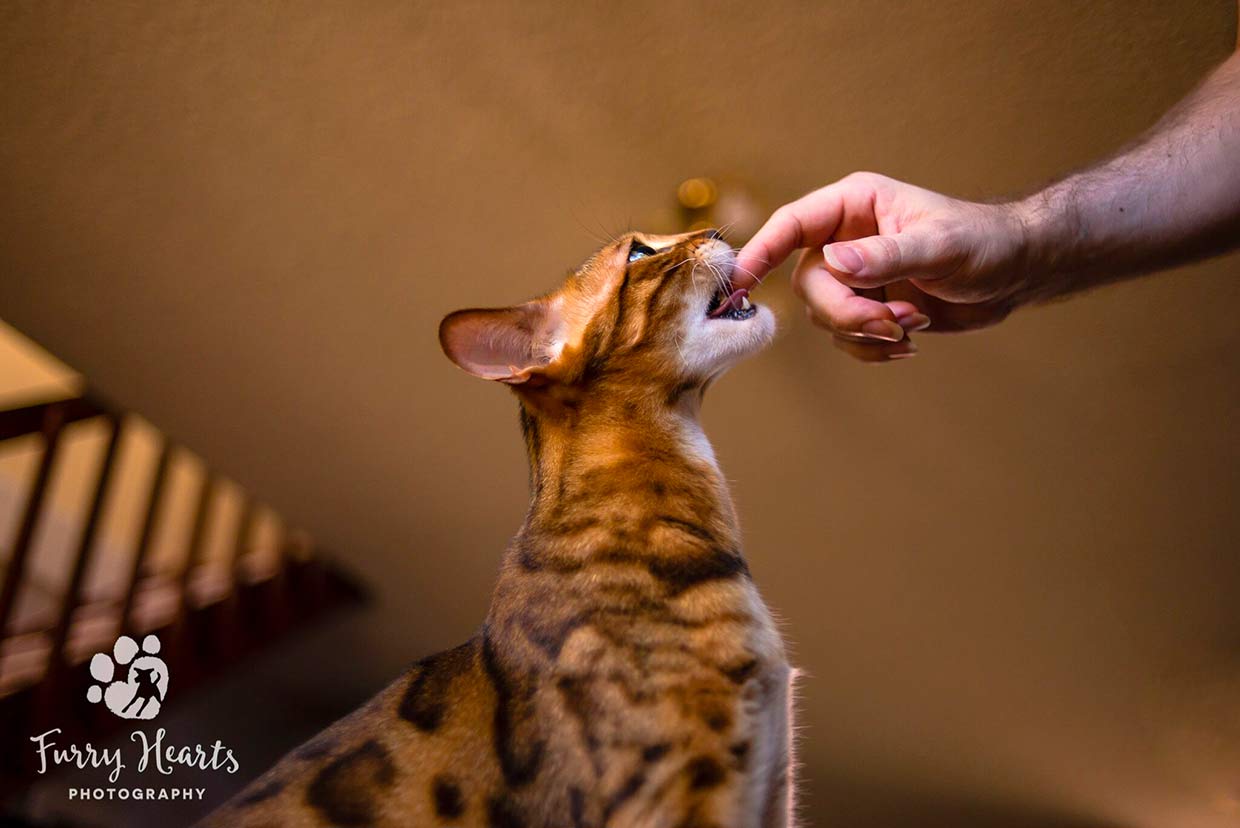 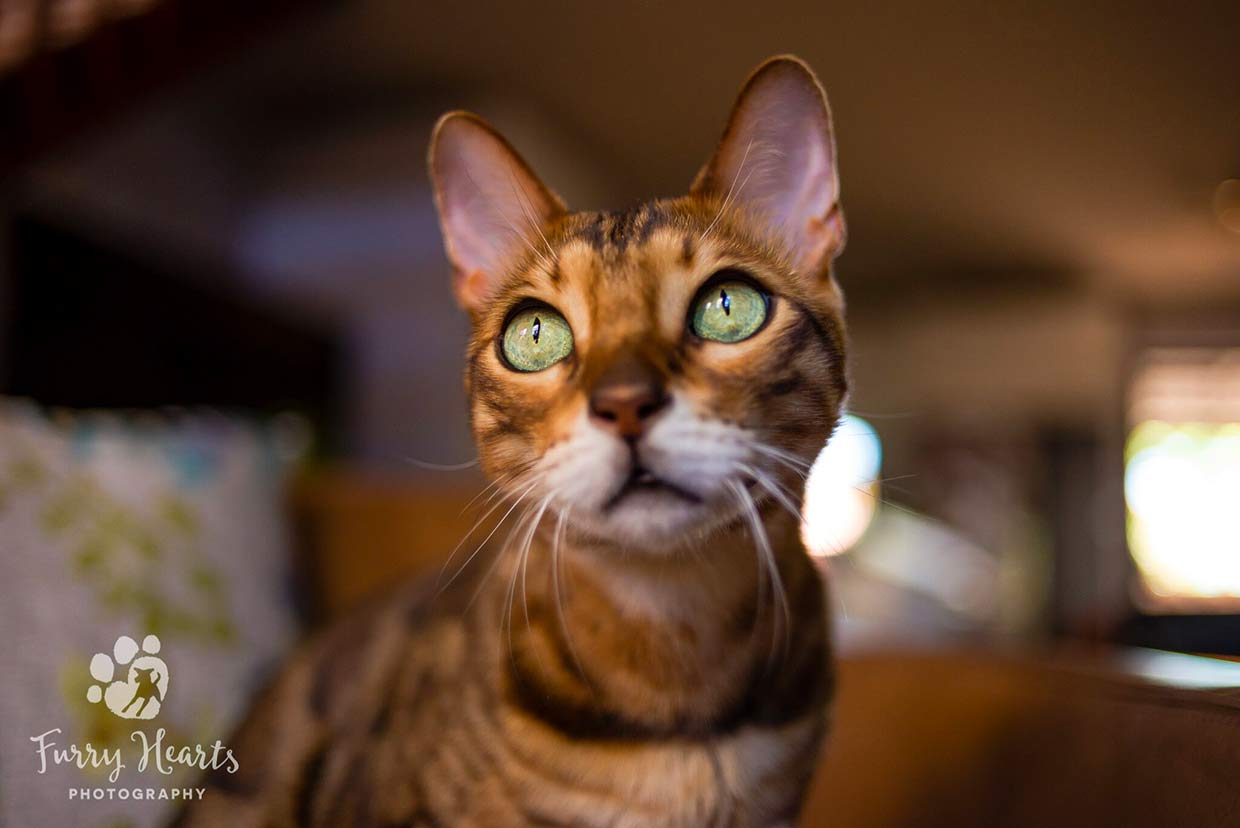 January 10, 2023
Previous article
Bengal Cat Behaviors Explained
Next article
This Video Of A Bengal Riding On A Surfboard Is Absolutely Amazing