[dropcap]W[/dropcap]e all know that Bengals are truly majestic creatures. They have amazing personalities and killer looks, so it’s not a surprise that this breed is a favorite amongst celebrity cat lovers. I had the privilege to interview a famous cat owner in the movie entertainment industry about his Bengal and the impact he had on his life.

Doug Ellin is an American screenwriter, producer and director, best known for his hit comedy-drama series Entourage. The TV show ran for 8 seasons on HBO, and was followed by a film adaptation in 2015. Ellin was born in Brooklyn, and graduated from the American Film Institute in 1994. His other achievements include the documentary “When the Garden Was Eden”, as well as movies “Kissing a Fool” and “Bad Santa 2”.

How many pets do you have and do they get along?
DOUG ELLIN: I have a German Shepherd as well as my Bengal (named Tex). The shepherd just wants to hang out with the Bengal but Tex is not only not interested, he puts the shepherd in his place. He let’s him know to keep his distance and the shepherd does.

Why did you choose your particular pets and decided to get a Bengal?
DE: I had never heard of a Bengal until my girlfriend showed me pictures. The cheetah was always my favorite wild animal and the Bengal reminded me of a cheetah so we went and got one that day.

What has your Bengal taught you about life?
DE: Not sure what my Bengal has taught me about life but I have seen a different side of cats than I ever imagined.

What do you love most about your Bengal?
DE: Bengals are much more dog like than I knew a cat could be.

Did you ever try to train your Bengal?
DE: I haven’t really trained him but he naturally fetches and comes.

Did anyone in your entourage fell in love with the breed after seeing yours and eventually got one?
DE: I have had several friends get Bengals because of mine. They are all amazed by his friendliness, athleticism, and just his general demeanor.

Do you sometimes have any problem writing with a Bengal cat around?
DE: He makes it impossible to work at home because he will come sit on the keyboard or on me. He likes to be in as close proximity to me as possible, so sometimes I have to put him in another room so I can work.

What’s your most challenging experience with your Bengal?
DE: The most challenging thing with him is keeping him inside. He’s an escape artist and desperately wants to be out, but there are coyotes where I live and I don’t want anything to happen to him. Also if I’m gone more than a few hours when I come back he literally yells at me. He’ll follow me everywhere for a good twenty minutes, screaming.

Is there a particular animal cause that you’re interested in, and if so, why?
DE: I’ve been involved with a number of animal charities and donate to lots of different ones.
We have fostered and found homes for many stray kittens and will continue to do so. Animal rights are extremely important to me. And the prevention of animal abuse should be important to every decent human being.

In an hilarious scene of the Entourage movie, we see Ari punching the framed picture of a Bengal kitten. Where did that idea come from?
DE: In Entourage, I wanted Ari to hit the cutest, most innocent animal possible, and my Bengal, Tex, fit the bill.

Is there any future project you’re working on that would include your Bengal again?
DE: I’m working on a couple of new things but no plans for Bengals in them, but you never know. I just executive produced a documentary called Charged that will be premiering at the Santa Barbara film festival next week. Charged is the amazing story of chef Eduardo Garcia, who was electrocuted in the back woods of Montana. The film covers his inspirational journey of recovery. No bengals appear in it but Eduardo has met mine.

If you could be an animal, what would you be and why?
DE: I would probably be a Cheetah because of their speed and grace. My Bengal really does have that, in miniature form.

After the interview, it wasn’t hard to figure out that Doug adores his Bengal cat. It’s easy to see in his answers that Tex is a true Bengal, playful and incredibly intelligent. His bossy attitude, desire to always be beside his human and his adorable shenanigans reminded me of my own Bengal. (And I’m willing to bet, more than a few of you that read it!)

In Doug’s Instagram video below, we can see that Tex is a big athlete, always jumping and running around and finding impossible places to climb on (a master shower, for example). He even loves playing fetch, despite not being trained. It’s funny how all Bengal cats share the same traits, but each of them has their own unique personalities.

But Doug’s Bengal isn’t the only furry friend in his life. Besides his German Shepherd, Doug also fosters kittens and helps them find new homes. It’s admirable that his love for felines inspires him to take notice of the abandoned and neglected kittens that need a family of their own. He’s passionate about animal rights and, aside from taking care of the kittens before they get adopted, he also donates to various animal charities.

When people hear about celebrities and their pets, they often don’t realize that, in that aspect, the people working in the show business industry are very much the same as us. They love their pets and consider them a part of the family, and in most cases, can’t imagine a life without them. You might say that in our love for animals, we’re all equal. The same goes for Doug and his Bengal Tex. Like most Bengals and their humans, they share a special bond. They are rarely apart and enjoy each other’s company (even when Tex interferes with Doug’s work!).

In the end, I can only thank Doug that I got the opportunity to hear firsthand how the life of a Bengal in Hollywood looks like! 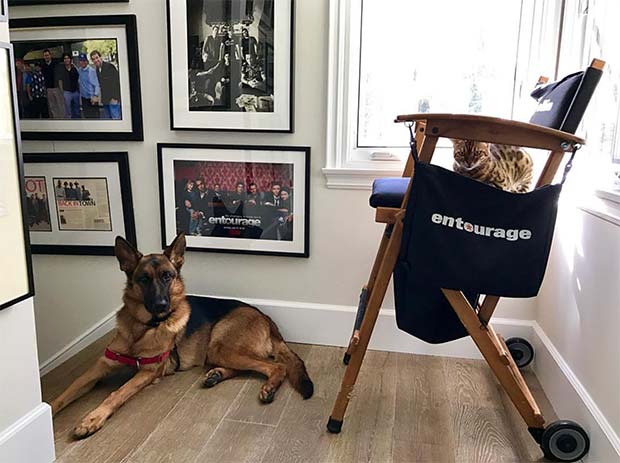 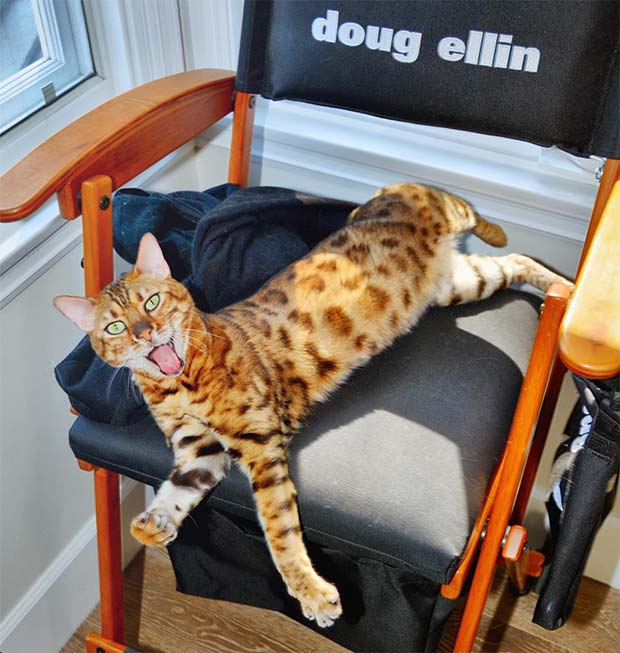 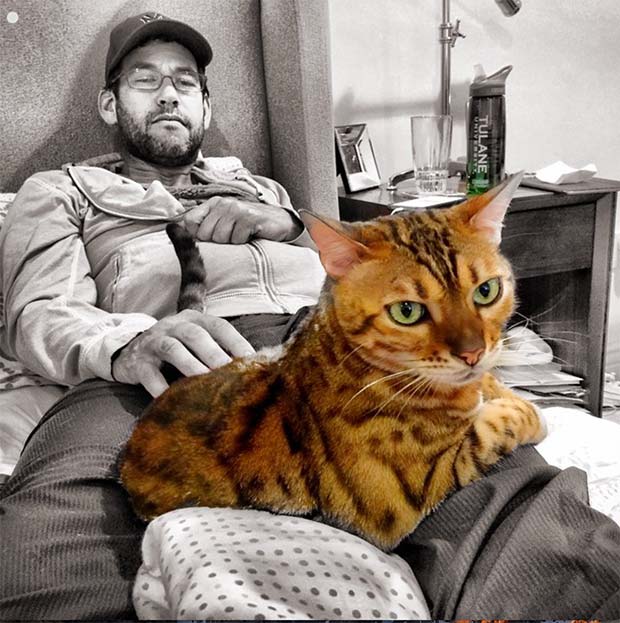 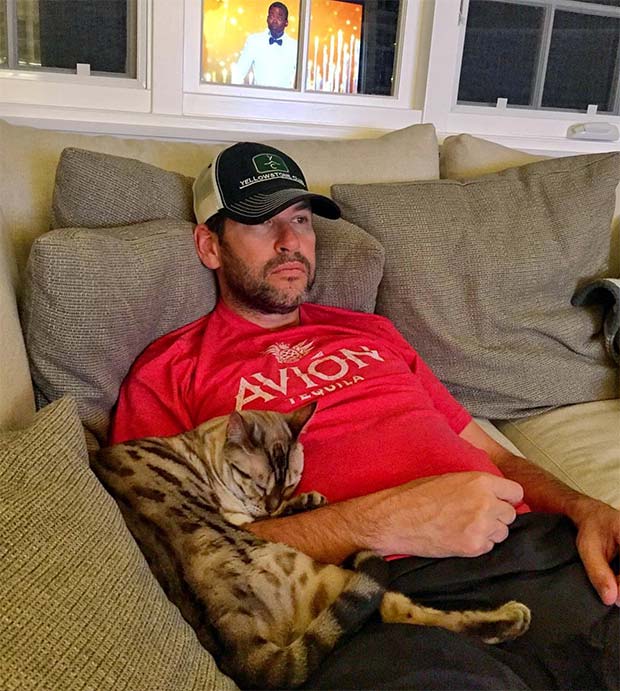 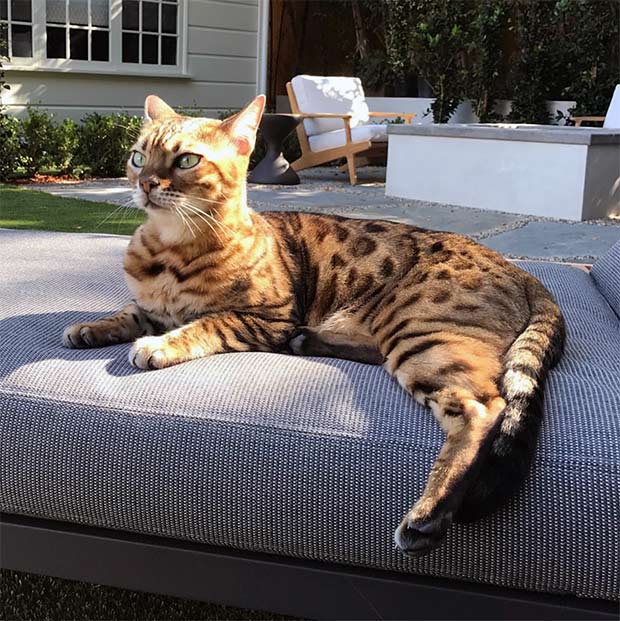 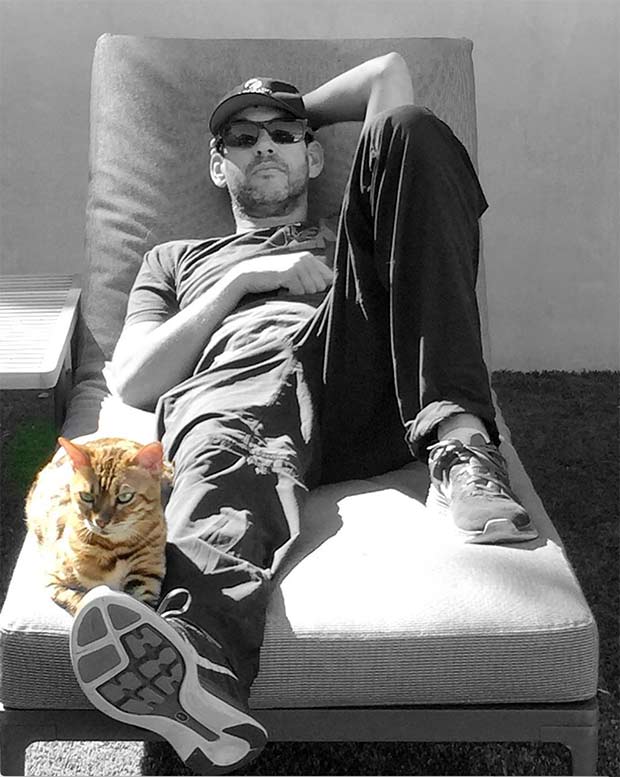 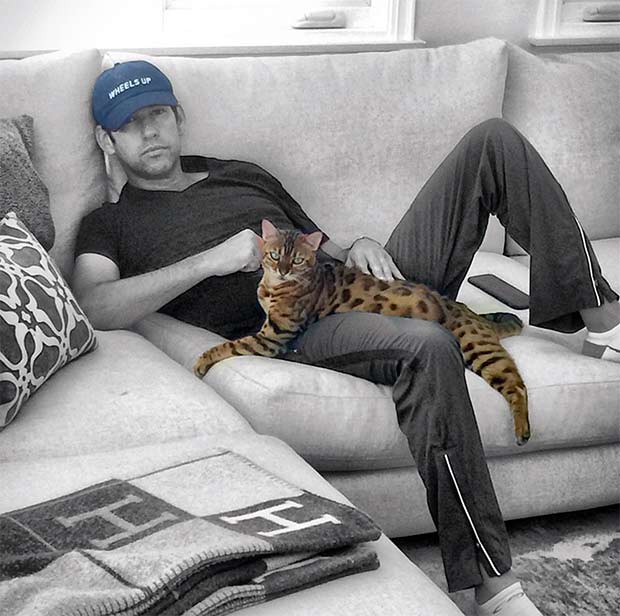 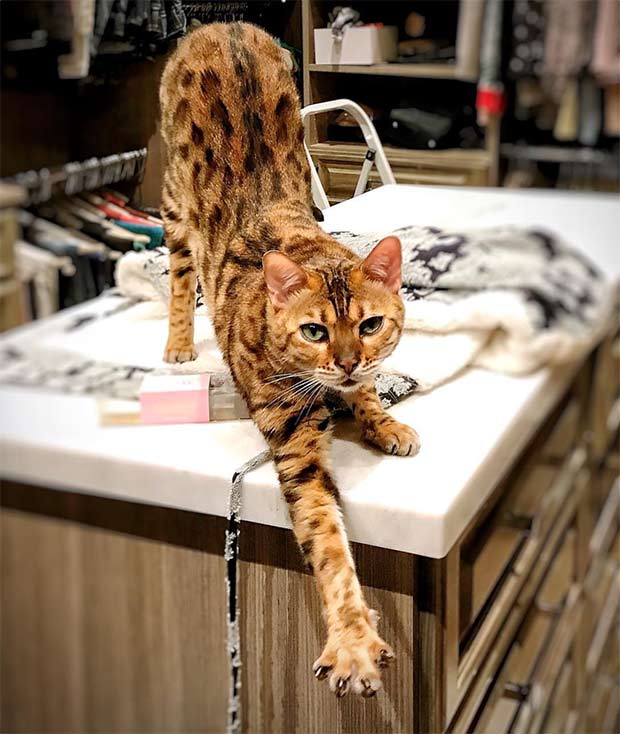 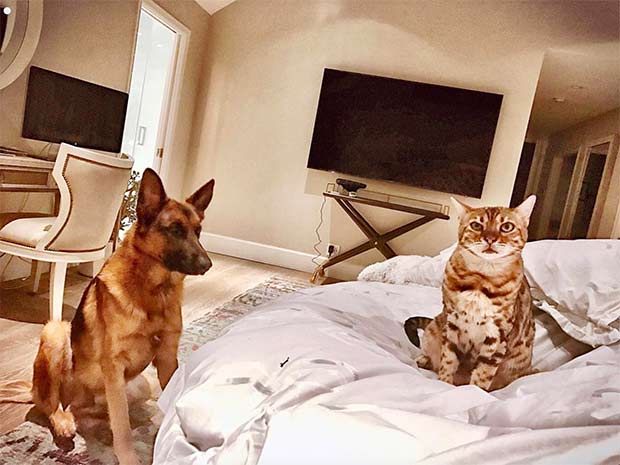 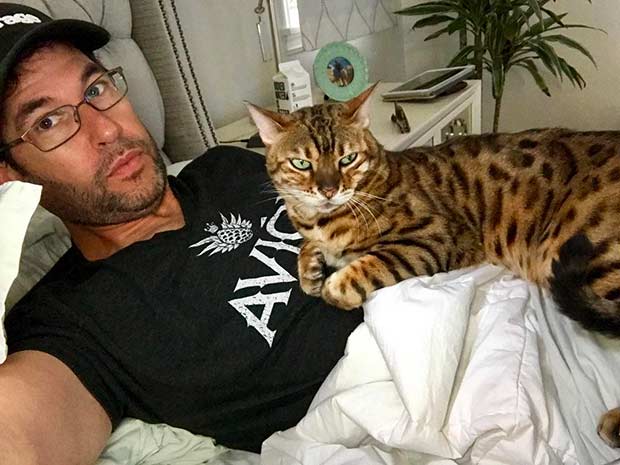 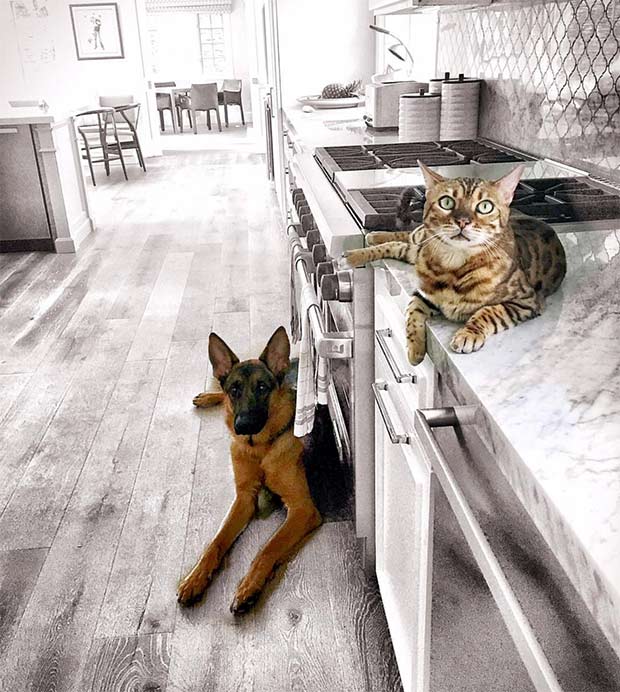 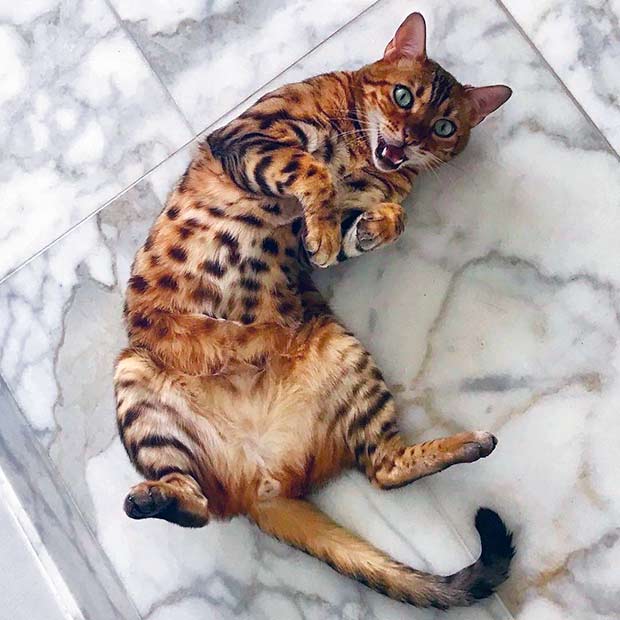 Have something to add to this story? Share it in the comments below.